Agapanthus and quaint cottage in Hill End New South Wales. The cottage dates from the gold rush era of the 1870s when Hill End was booming. 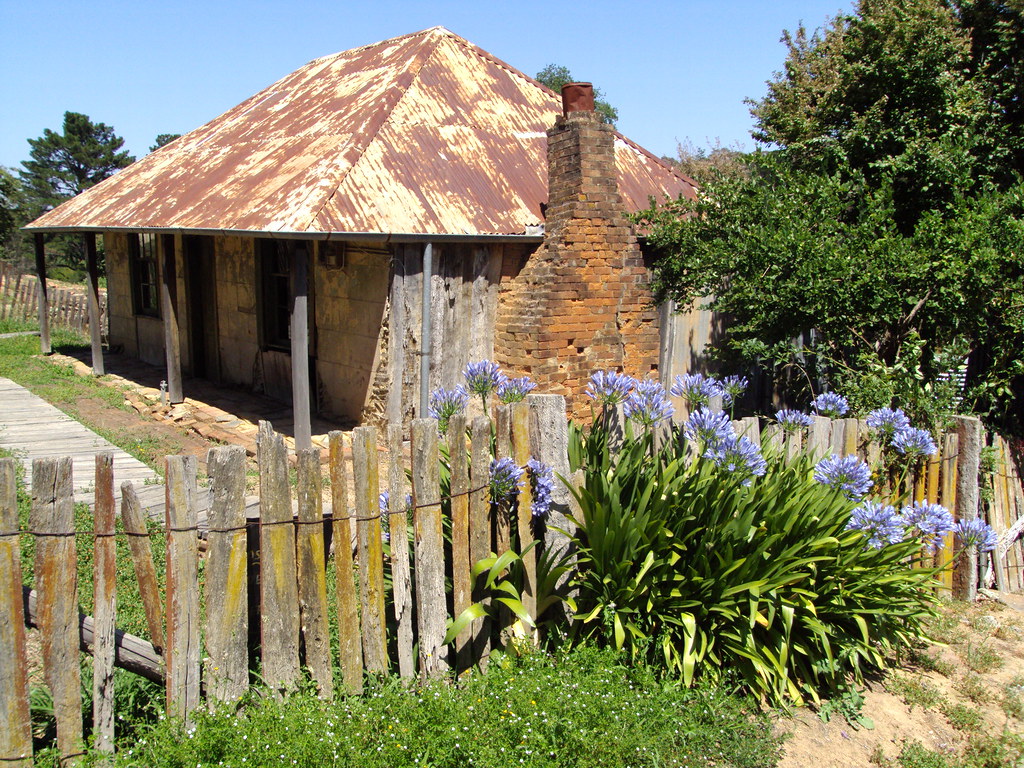 License: Creative Commons - Attribution-No Derivatives
Author: denisbin
Description:
Sofala. This 1851 gold town is picturesquely situated on the Turon River. It was the second gold strike town in Australia. Like Hill End it gradually declined from the 1860s inwards. Several Australian films have been shot in the town. The town was named after Sofala in Mozambique from where King Solomon supposedly gained his gold. The town was located on the river at one of the few spots where the steep banks allowed a town to grow. Within a few weeks Sofala had a population of between 3,000 and 5,000 people who were mainly diggers. One lucky digger at Sofala found a nugget weighing 3½ lbs. By the end of 1851 it had a Catholic and an Anglican Church, 2 hotels, and a store. Most of these buildings were made of brush and bark and soon disappeared. Gold rush buildings that you can see in Sofala include: the Royal Hotel (1862); the General Store (1860s); the former Court House (1874); the former Post Office (1879); the gas Hotel (1851); and some old cottages. Sofala has a population of around 200 people today. Hill End – historic gold village. There were literally dozens of small finds of gold around Hill End from June 1851 onwards. Nearby Tambaroora no longer exists as a settlement. The early town was a canvas settlement, mud and bark huts followed, and finally more solid brick structures went up in the 1870s. The early 1870s were the real boom period for Hill End and make it so special. Henry Lawson used to come here to visit a local pub and he wrote a poem “Tambaroora Jim” about the place. Remember that in its heyday Hill End had 30,000 residents, 51 licensed pubs in the area and 28 in town (and a few unlicensed ones), numerous shops and stores, churches, and dozens and dozens of shanties and tents. Most of the shanties have disappeared with time as they were flimsy to start with. Hill End diggings were abuzz with activity and diggers came from California, Europe and China. NSW did not put a tax on the landing of Chinese diggers until 1861. The Chinese were disliked, their shanties burnt, they were taunted and teased and fights at hotels were common. No anti-Chinese riots occurred in Hill End but there was a major conflict at Tambaroora nearby. In the 1850s nearly all diggers carried a pistol, drunkenness was rife, and prostitutes plied their business in the pubs. The Chinese added to the exotic nature of the diggings with their opium smoking. Bushrangers lurked on the roads waiting for lone diggers or gold escorts. Most transportation was on foot, horse or by the coach service established by a Massachusetts man who came to Australia from the California gold diggings. He established Cobb & Co coaches in 1854 with the head office in Bathurst. The first gold battery to crush any ore was started in Hill End by Mr Sargent in 1852. Diggers had to have gold licenses, but unlike Victoria, they were not exorbitantly pricey and never caused any problems on the NSW goldfields. The alluvial gold rush continued in Hill End until 1874 but it gradually declined as reef mining grew in returns. For example, in Tambaroora 24,000 ozs of gold found in 1858 declined to 14,000 ozs in 1868. Reef gold output increased from 17,000 ozs in Hill End in 1870 to 42,000 ozs in 1872. The discovery of major reefs of gold in 1871 revitalised the rushes and put Hill End into the world’s gold history books! This was the period when 30,000 people lived in the area. The reef mining necessitated shafts and small gold mining companies. Many of the companies only had two shareholders or proprietors; others were much bigger with thousands of pounds of capital to finance the mining and shafts. By the end of 1872, the big rush year, Hill End had 225 companies exploring the reefs for gold. The most famous company was Beyers and Holtermann. Both men lived on in the town until they died in the 1890s. Beyers became the town’s mayor, and Holtermann a local businessman and philanthropists of sorts. In 1872 they discovered the world’s largest ever gold nugget. Unfortunately, they sent it to the crusher. It measured 4 feet 9 inches, by 2 feet 2 inches, with an average depth of 4 inches. It weighed about 130 to170 lbs. Their company paid a dividend of £25 for their £1 shares! Holtermann went on to build 2 blocks of shops in Hill End; he contributed to the Temperance Hall and he supported the Anglican and Presbyterian Churches. He had the controlling interest in the local newspaper and he was disliked by most town residents. Beyers, on the other hand was universally liked. As mayor for many years he planted the English trees (1878) in Hill End and he finally went bankrupt in 1894. During this boom period there was talk of building a cathedral in Hill End, and £900,000 worth of gold was mined in just one year. Hill End gradually faded as a town with just a few hundred residents. During the 1930s desperate, unemployed, gold diggers returned to try their luck again. Then in the 1940s it became a haven for artists and bohemians. Russell Drysdale and Donald Friend established bases here and other artists followed including Brett Whiteley, Margaret Olley and Jeffrey Smart. It still has an artists’ colony. In the 2006 census the town had just 166 residents. The whole town is a heritage town controlled by the National Parks and Wildlife Service. Historic buildings in the town in addition to the many charming cottages include: the old Hospital ( 1873); Craigmour House ( 1878); the Royal Hotel ( 1876); the Presbyterian Church (1870s); the Post Office (1873); the Police Station ( 1870s); the School (1870); Hoses Stores (1873) now Hill End Bed and Breakfast and Holtermann’s Arcade of shops ( 1870s).