Valley of the Grose 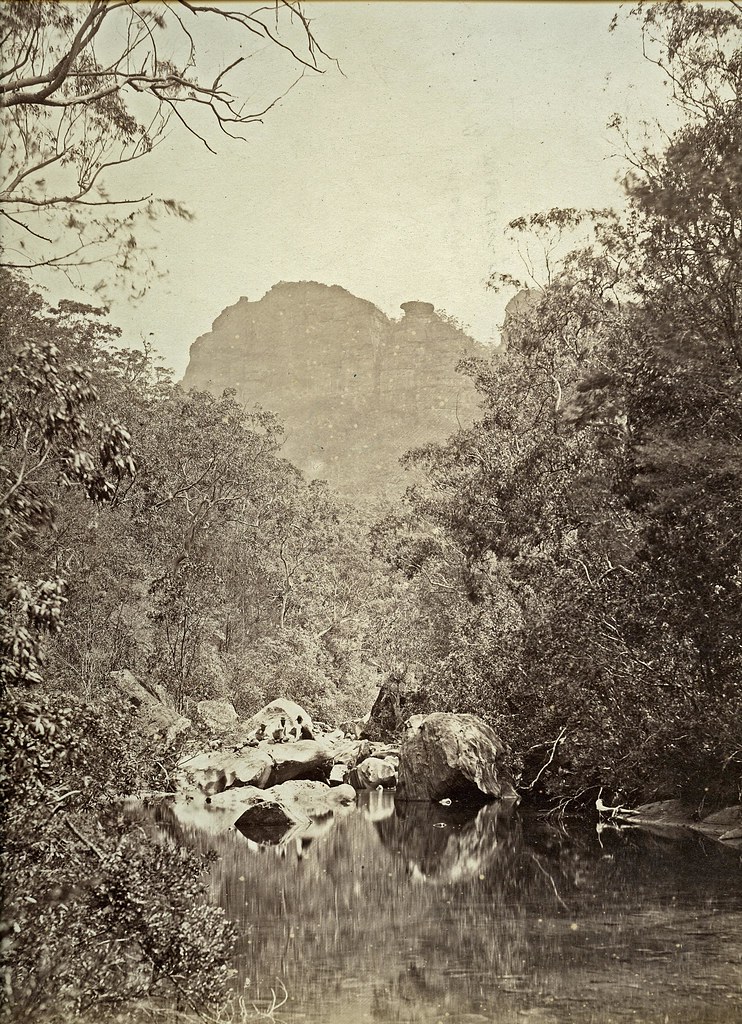 License: Creative Commons - Attribution-Share Alike
Author: Blue Mountains Library, Local Studies
Description:
Notes: Three men pose on a rock in the stream bed of the Grose, among them may be F. E. Du Faur, the painter William Piguenit and Ecclestone Du Faur's camp assistant Lewis Thompson. In the background may be Du Faur Head opposite Mt Banks. Frederick Eccleston Du Faur, Chief Draughtsman in the Crown Lands Office in the 1870s formed a strong attachment to the Blue Mountains landscape "which for sublimity of grandeur, is not to be surpassed in the world." His vision encompassed the opening up of this spectacular region "to tourists and artists" and the encouragement of its use as "a healthy field of exercise for the young men of our own city". His enthusiasm, fuelled by numerous visits, was expressed widely and discussion of "Du Faur's Blue Mountains Craze" was heard regularly in the salons of Sydney society. From his newly established hut at nearby Mount Wilson, Du Faur mounted regular excursions into the Grose Valley. In 1875 he established a camp in the Grose about fifteen kilometres from the Hartley Vale siding. This was reached via a track constructed by surveyors assessing the region for construction of a railway line in 1857. Du Faur reopened the track which had become obstructed by fallen trees, landslips and undergrowth. A second artist’s camp was established about eight kilometres further down the Grose at its confluence with Govett’s Leap Creek, below Mount King George [Mount Banks], about which Du Faur wrote in a letter to the Sydney Morning Herald in October 1875: “It may be mentioned that at the time of my leaving the camp on Monday last, Mr Piguenit had secured about 15 subjects. Sketching them in water colours, he intends reproducing them in oils. He and Mr Bischoff, the landscape photographer, will probably remain in the valley for another ten days and quit it with regret.” The albumen print, also called albumen silver print, was invented in 1850 by Louis Désiré Blanquart-Evrard, and was the first commercially exploitable method of producing a photographic print on a paper base from a negative. It used the albumen found in egg white to bind the photographic chemicals to the paper and became the dominant form of photographic positives from 1855 to the turn of the 20th century, with a peak in the 1860-90 period. During the mid-19th century, the carte de visite became one of the more popular uses of the albumen method. Because the image emerges as a direct result of exposure to light, without the aid of a developing solution, an albumen print may be said to be a printed rather than a developed photograph. Format: Albumen silver photo-print by Joseph BISCHOFF (c.1832-1903). Image size - 24.3 x 33.4 cm (9 ½” x 13 ¼”) ; image and sheet - 29.8 x 39.2 cm. Licensing: Attribution, share alike, creative commons. Repository: Blue Mountains City Library www.bmcc.nsw.gov.au/yourcommunity/library Part of: Local Studies Collection PF 876 Provenance: Purchased References: 'Pictorial Memories, Blue Mountains' by John Low, Atrand 1991. Links: en.wikipedia.org/wiki/Albumen_print archivesoutside.records.nsw.gov.au/joseph-bischoff-the-ma... photo-web.com.au/ShadesofLight/06-expedition.htm