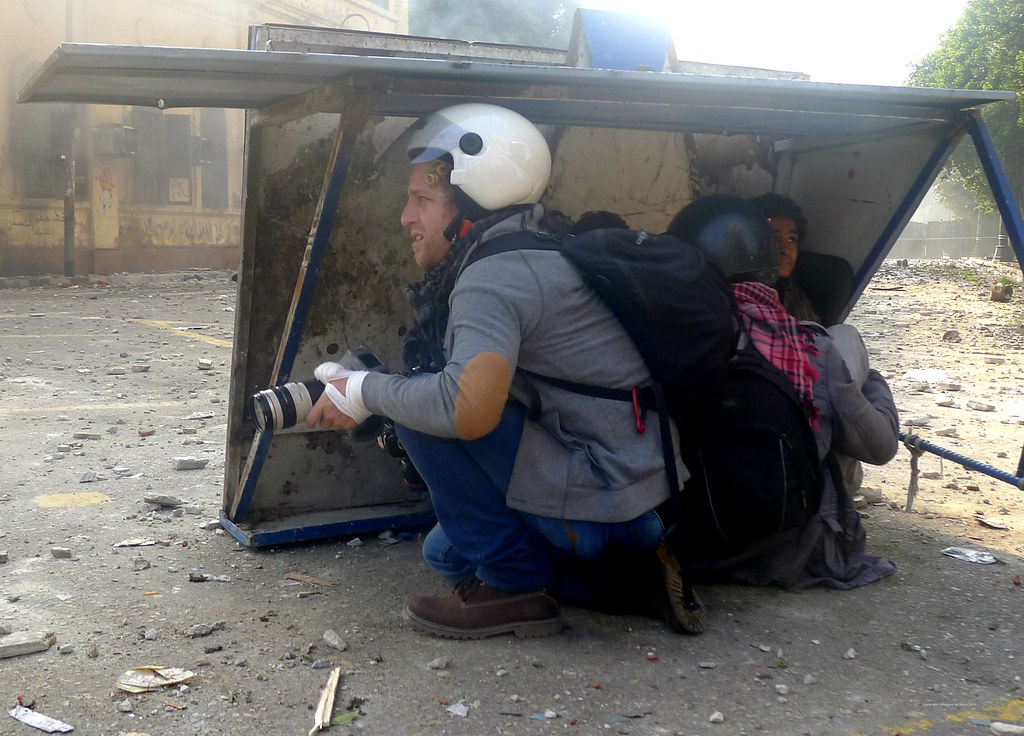 License: Creative Commons - Attribution-Share Alike
Author: Alisdare Hickson
Description:
You might just make out the top of the second child's head behind the rucksack of the injured journalist with the white helmet. Just after 8am on the morning of 17 December 2011 on Qasr El Aini street in Downtown Cairo. Militia have taken up a position on the rooftop of the Egyptian Insititute which overlooks the route from Tahrir Square towards parliament and the ministry of interior - along which protesters wish to head. The militia throw rocks and even concrete slabs down on to the protesters below, most of whom retreat back towards the square. A large number of soldiers are positioned less than 100 metres away to protect the MOI and parliament but they do nothing to stop the violence or the subsequent burning of the Insititute by unknown individuals. It was only two hours later that soldiers cleared the streets and Tahrir Square beating and arresting many innocent people. The government later claimed that the stone throwing militia were in fact angry local residents but failed to explain how some of them were uniformed or how they deployed so quicky when there are very few residents in that part of Cairo. ( www.merip.org/mero/mero010112 ). Update April 2020 -. If anyone is interested in the forgotten history of British imperialism and how it impacted the lives of millions of people around the world including Egypt from the 1700s until today - I've posted over 600 short articles on the following website. roguenation.org/ including the following page where you can select from over 600 pages according to country - roguenation.org/choose-by-country