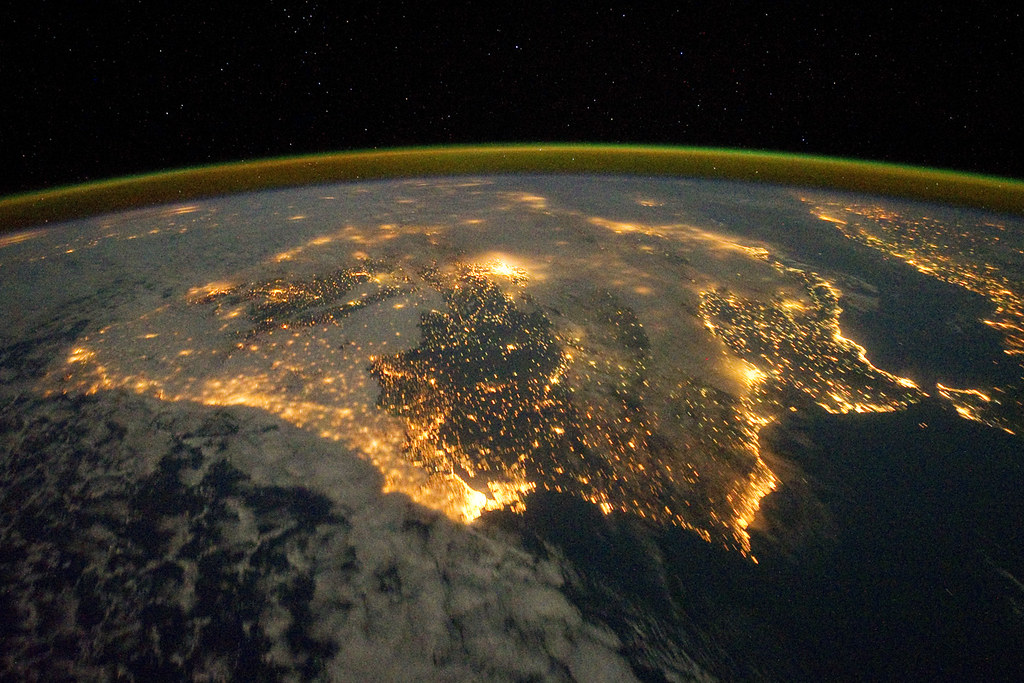 License: Creative Commons - Attribution
Author: NASA Goddard Space Flight Center
Description:
The city lights of Spain and Portugal define the Iberian Peninsula in this photograph from the International Space Station (ISS). Several large metropolitan areas are visible, marked by their relatively large and brightly lit areas, including the capital cities of Madrid, Spain—located near the center of the peninsula’s interior—and Lisbon, Portugal—located along the southwestern coastline. The ancient city of Seville, visible to the north of the Strait of Gibraltar, is one of the largest cities in Spain. The astronaut view is looking toward the east, and is part of a time-lapse series of images. The network of smaller cities and towns along the coastline and in the interior attest to the extent of the human presence on the Iberian landscape. The blurring of city lights is caused by thin cloud cover (image left and center), while cloud tops are dimly illuminated by moonlight. Though obscured, the lights of France are visible near the horizon line on the upper left, while the lights of northern Africa are more clearly discernable at right. The faint gold and green line of airglow—caused by ultraviolet radiation exciting the gas molecules in the upper atmosphere—parallels the horizon (or Earth limb). The Iberian Peninsula is the southwestern-most of the European peninsulas (together with the Italian and Balkan peninsulas), and includes the Principality of Andorra, as well as the Kingdom of Spain and the Portuguese Republic. The approximately 590,000 square kilometer landmass is bounded by the Atlantic Ocean to the northwest, west, and southwest and the Mediterranean Sea to the east. Its northeastern boundary is marked by the Pyrenees mountain range. Astronaut photograph ISS030-E-10008 was acquired on December 4, 2011, with a Nikon D3S digital camera using a 24 mm lens, and is provided by the ISS Crew Earth Observations experiment and Image Science & Analysis Laboratory, Johnson Space Center. The image was taken by the Expedition 30 crew. The image has been cropped and enhanced to improve contrast. Lens artifacts have been removed. The International Space Station Program supports the laboratory as part of the ISS National Lab to help astronauts take pictures of Earth that will be of the greatest value to scientists and the public, and to make those images freely available on the Internet. Additional images taken by astronauts and cosmonauts can be viewed at the NASA/JSC Gateway to Astronaut Photography of Earth. Caption by William L. Stefanov, Jacobs Technology/ESCG at NASA-JSC. Instrument: ISS - Digital Camera NASA Goes to the Olympics – View all the cities that have hosted the modern Summer Olympics, starting with Athens in 1896 thru London in 2012. There have been 29 Summer Olympic Games held in 22 different cities. Repeating host cities include Athens, Paris, London and Los Angeles. Credit: NASA Earth Observatory NASA image use policy. NASA Goddard Space Flight Center enables NASA’s mission through four scientific endeavors: Earth Science, Heliophysics, Solar System Exploration, and Astrophysics. Goddard plays a leading role in NASA’s accomplishments by contributing compelling scientific knowledge to advance the Agency’s mission. Follow us on Twitter Like us on Facebook Find us on Instagram