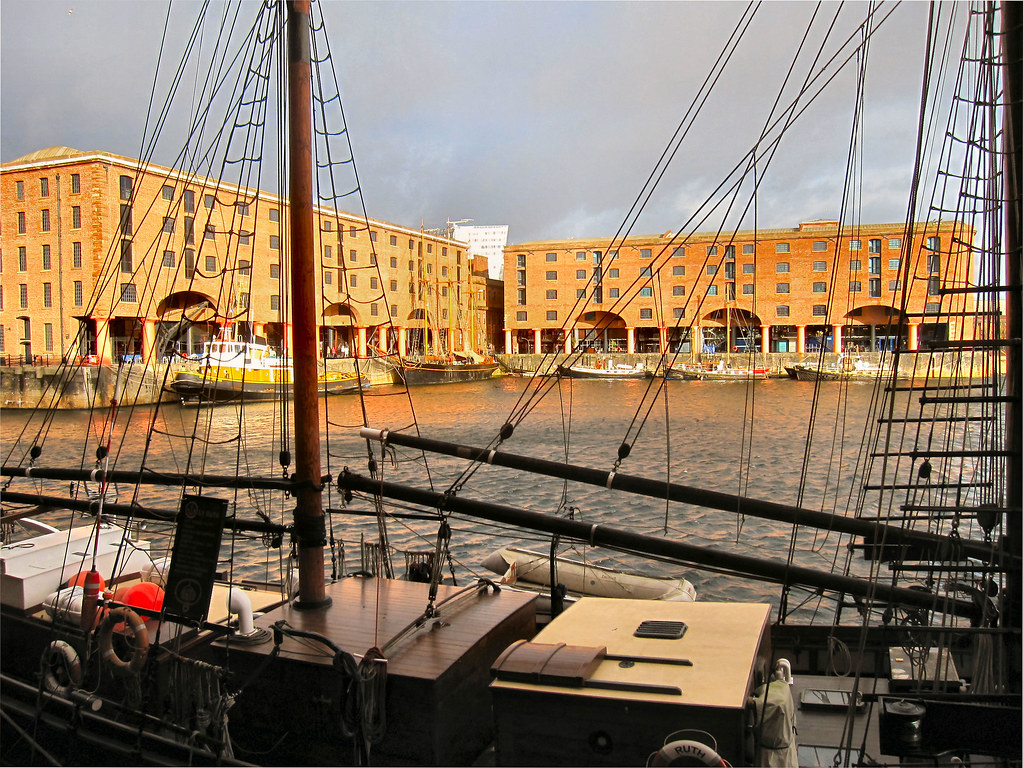 License: Creative Commons - Attribution-Share Alike
Author: Ronald Saunders
Description:
The Albert Dock is a complex of dock buildings and warehouses in Liverpool, England. Designed by Jesse Hartley and Philip Hardwick, it was opened in 1846, and was the first structure in Britain to be built from cast iron, brick and stone, with no structural wood. As a result, it was the first non-combustible warehouse system in the world.[1] At the time of its construction the Albert Dock was considered a revolutionary docking system because ships were loaded and unloaded directly from/to the warehouses. Two years after it opened it was modified to feature the world's first hydraulic cranes.[2] Due to its open yet secure design, the Albert Dock became a popular store for valuable cargoes such as brandy, cotton, tea, silk, tobacco, ivory and sugar. However, despite the Albert Dock's advanced design, the rapid development of shipping technology meant that within 50 years, larger, more open docks were required, although it remained a valuable store for cargo. During the Second World War, the Albert Dock was requisitioned by the Admiralty serving as a base for boats of the British Atlantic Fleet. The complex was damaged during air raids on Liverpool, notably during the May Blitz of 1941. In the aftermath of the war, the financial problems of the owners and the general decline of docking in the city meant that the future of the Albert Dock was uncertain. Numerous plans were developed for the re-use of the buildings but none came to fruition and in 1972 the dock was finally closed. Having lain derelict for nearly ten years, the redevelopment of the dock began in 1981, when the Merseyside Development Corporation was set up, with the Albert Dock being officially re-opened in 1988. Today the Albert Dock is a major tourist attraction in the city and the most visited multi-use attraction in the United Kingdom, outside of London.[3] It is a vital component of Liverpool's UNESCO designated World Heritage Maritime Mercantile City and the docking complex and warehouses also comprise the largest single collection of Grade I listed buildings anywhere in the UK.