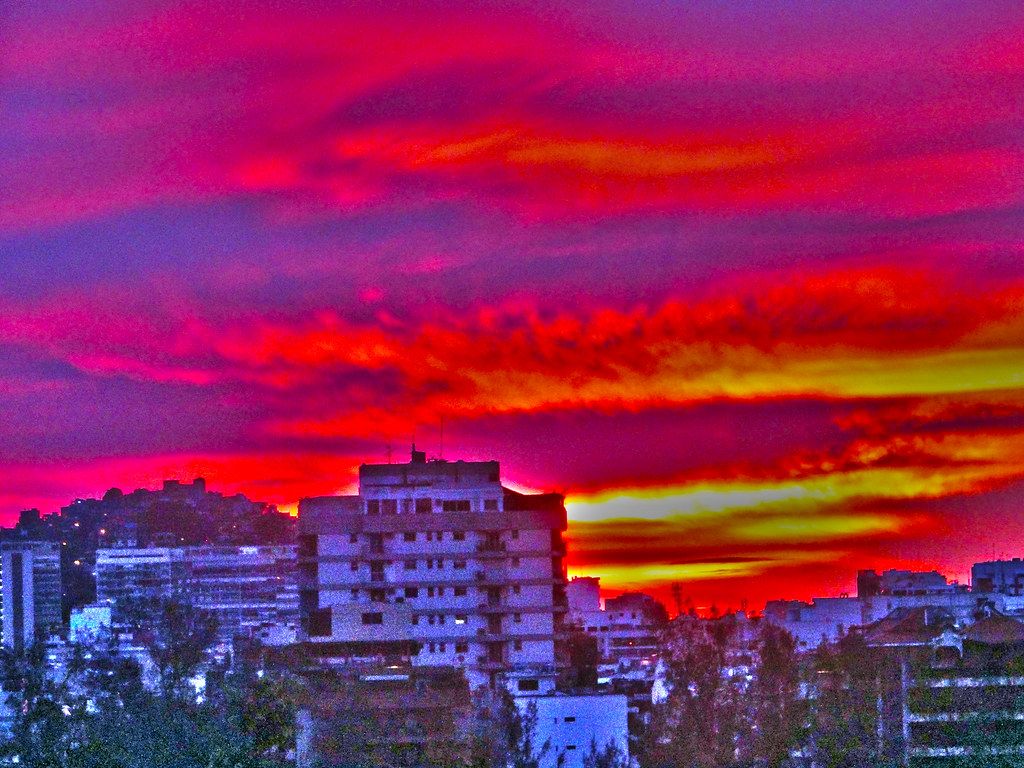 License: Creative Commons - Attribution-No Derivatives
Author: Rodrigo Soldon
Description:
Rio de Janeiro, Brasil O nascer do Sol é o nome que se dá ao momento em que o Sol aparece no horizonte, na direcção Leste. Este acontecimento verifica-se todos os dias em todas as regiões compreendidas entre os dois círculos polares. A este período do dia dá-se o nome de alvorada, alva ou alba. ------------------------------------ Sunrise is the instant at which the upper edge of the Sun appears above the horizon in the east. Sunrise should not be confused with dawn, which is the (variously defined) point at which the sky begins to lighten, some time before the sun itself appears, ending twilight. Because atmospheric refraction causes the sun to be seen while it is still below the horizon, both sunrise and sunset are, from one point of view, optical illusions. The sun also exhibits an optical illusion at sunrise similar to the moon illusion. The apparent westward revolution of Sun around the earth after rising out of the horizon is due to the Earth's eastward rotation, a counter-clockwise revolution when viewed from above the North Pole. This illusion is so convincing that most cultures had mythologies and religions built around the geocentric model. This same effect can be seen with near-polar satellites as well. Sunrise and sunset are calculated from the leading and trailing edges of the Sun, and not the center; this slightly increases the duration of "day" relative to "night". The sunrise equation, however, is based on the center of the sun. The timing of sunrises vary throughout the year, as determined by the viewer's longitude and latitude, altitude, the time of year, and time zone of the viewer's location. Small daily changes and noticeable semi-annual changes in the timing of sunrises are driven by the axial tilt of Earth, daily rotation of the earth, the planet's movement in its annual elliptical orbit around the Sun, and the earth and moon's paired revolutions around each other. In the summertime, the days get longer and sunrises occur earlier every day until the day of the earliest sunrise, which occurs before the summer solstice. In the Northern Hemisphere, the earliest sunrise does not fall on the summer solstice around June 21, but occurs earlier in June. The precise date of the earliest sunrise depends on the viewer's latitude (connected with the slower Earth's movement around the aphelion around July 4). Similarly, the latest sunrise does not occur on the winter solstice, but rather about two weeks later, again depending the viewer's latitude. In the Northern Hemisphere the latest sunrise occurs in early January (influence from the Earth's faster movement near the perihelion which occurs around January 3). Likewise, the same phenomena exist in the Southern Hemisphere except with the respective dates reversed, with the latest sunrises occurring some time after June 21 in winter and earliest sunrises occurring some time before December 21 in summer, again depending on one's southern latitude. For one or two weeks surrounding both solstices, both sunrise and sunset get slightly later or earlier each day. Even on the equator, sunrise and sunset shift several minutes back and forth through the year, along with solar noon. These effects are plotted by an analemma.[1][2] Due to Earth's axial tilt, whenever and wherever sunrise occurs, it is always in the northeast quadrant from the March equinox to the September equinox and in the southeast quadrant from the September equinox to the March equinox. Sunrises occur due east on the March and September equinoxes for all viewers on Earth. As sunrise and sunset are calculated from the leading and trailing edges of the sun, and not the centre, the duration of "day" is slightly longer than "night". Further, because the light from the sun is bent by the atmospheric refraction, the sun is still visible after it is geometrically below the horizon. The sun also appears larger on the horizon, which is another optical illusion, similar to the moon illusion. ------------------------------------------------ Le lever de Soleil est la période du jour où le Soleil apparaît au-dessus de l'horizon vers l'Est. Il est précédé de l'aube, pendant laquelle le ciel commence à s'illuminer, quelques temps avant l'apparition du Soleil. Il s'agit d'un phénomène visible par un observateur situé sur un point donné de la surface du globe terrestre.