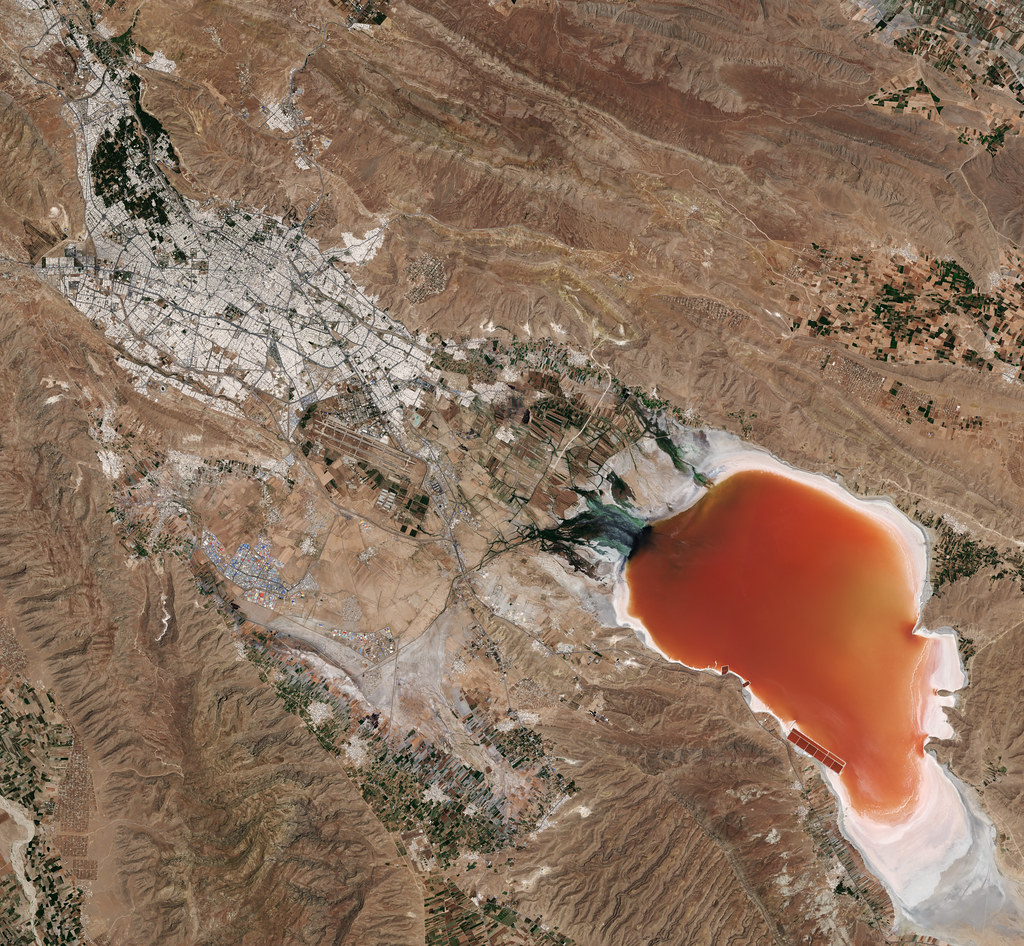 License: Creative Commons - Attribution-Share Alike
Author: European Space Agency
Description:
Maharloo Lake, a seasonal salt lake in Iran, is featured in this image captured by the Copernicus Sentinel-2 mission. Maharloo sits at an altitude of around 1400 m above sea level and is located around 27 km southeast of Shiraz, in southwest Iran. Yearly evaporation in the desert region is much greater than the yearly rainfall, meaning the lake is often very dry. Owing to the high evaporation rate, the lake’s bed has been covered by salt over time. This increased salinity in the lake’s waters has allowed certain algae to thrive and cover the surface. The water includes a variety of organisms that display colours ranging from pink to orange to red, with the strength of the colour differing in various periods of the year. Usually, the deeper the lake is, the darker the colours of the water. Given the lake is seasonal, water levels will drop in the summer and rise again in the winter. In this image, captured in June 2019, the lake appears dark orange which means that the lake is very shallow but still contains some water. In comparison, Maharloo was completely dry in June 2021. As is the case with many desert lakes, salt washed down from the surrounding mountains accumulates and can be seen in the image as a white crust along the lake’s shores. In some parts of the lake, facilities have been built for salt extraction (visible in this image along the southern shore). The lake’s excessive salinity prevents organisms, especially fish, from living in the lake. However, some birds migrate to Maharloo during the summer months, including flamingo. Shiraz, visible in the top-left of the image, is the fourth-most-populous city of Iran. Shiraz International Airport can be seen just south of the city. With its 13 spectral channels, the Copernicus Sentinel-2’s novel imager can capture water quality parameters such as the surface concentration of chlorophyll, detect harmful algal blooms, and measure turbidity (or water clarity) – giving a clear indication of the health and pollution levels. This image is also featured on the Earth from Space video programme. Credits: contains modified Copernicus Sentinel data (2019), processed by ESA, CC BY-SA 3.0 IGO