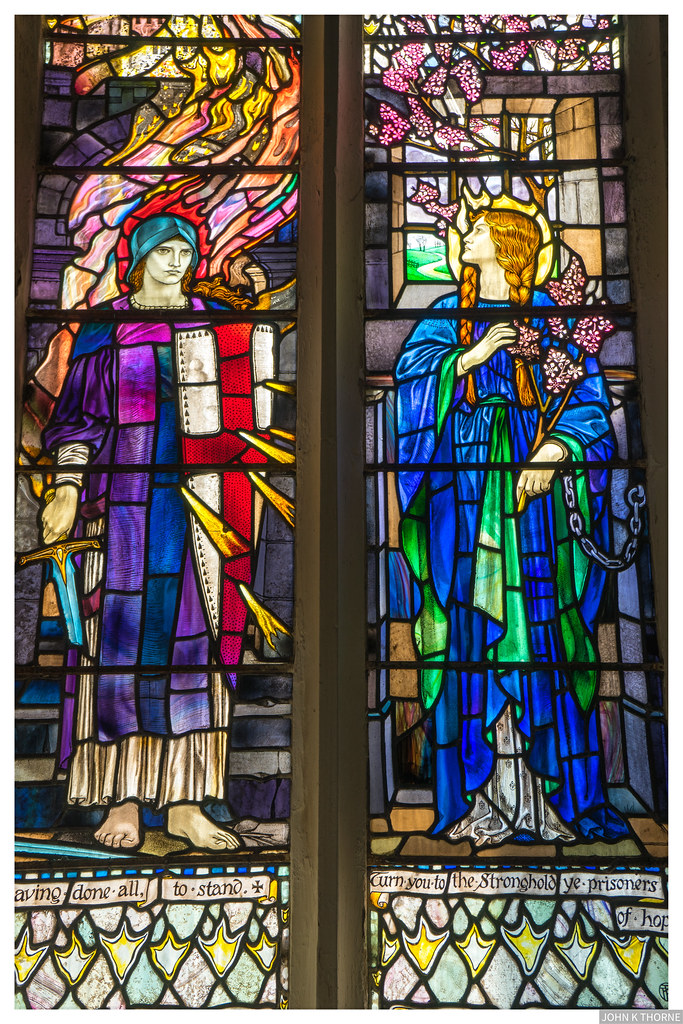 License: Creative Commons - Attribution
Author: John K Thorne
Description:
A window by Karl Parsons in All Saints’, Eastchurch on the Isle of Sheppey, is in memory of Hon Charles Stewart Rolls and Cecil Stanley Grace, the first British aviators to lose their lives in aircraft accidents. "The window was consecrated in 1912 by Randall Davidson, Archbishop of Canterbury. John Newman in the Pevsner series "Buildings of England", wrote that the window was " heavily indebted to the style of Burne Jones." Charles Stewart Rolls (1877–1910) was a motoring and aviation pioneer. Together with Frederick Henry Royce he co-founded the Rolls-Royce car manufacturing firm. He was the first Briton to be killed in a flying accident, when the tail of his Wright Flyer broke off during a flying display near Bournemouth, England. He was aged 32. Cecil Stanley Grace (1880–1910) was a pioneer aviator who went missing on a flight across the English Channel later in 1910. The window was commissioned by the Royal Aero Club and Eastchurch was chosen as both men had done much of their early flying on the Isle of Sheppey. The window is of two lights entitled "Fortitude" and "Hope"." The inscription on the window reads: Having done all, to stand. + Turn you to the Stronghold ye prisoners of hope. To the Glory of God & in memory of Charles Stewart Rolls & Cecil Stanley Grace Aviators July December 1910 This window is given by friends AD 1912