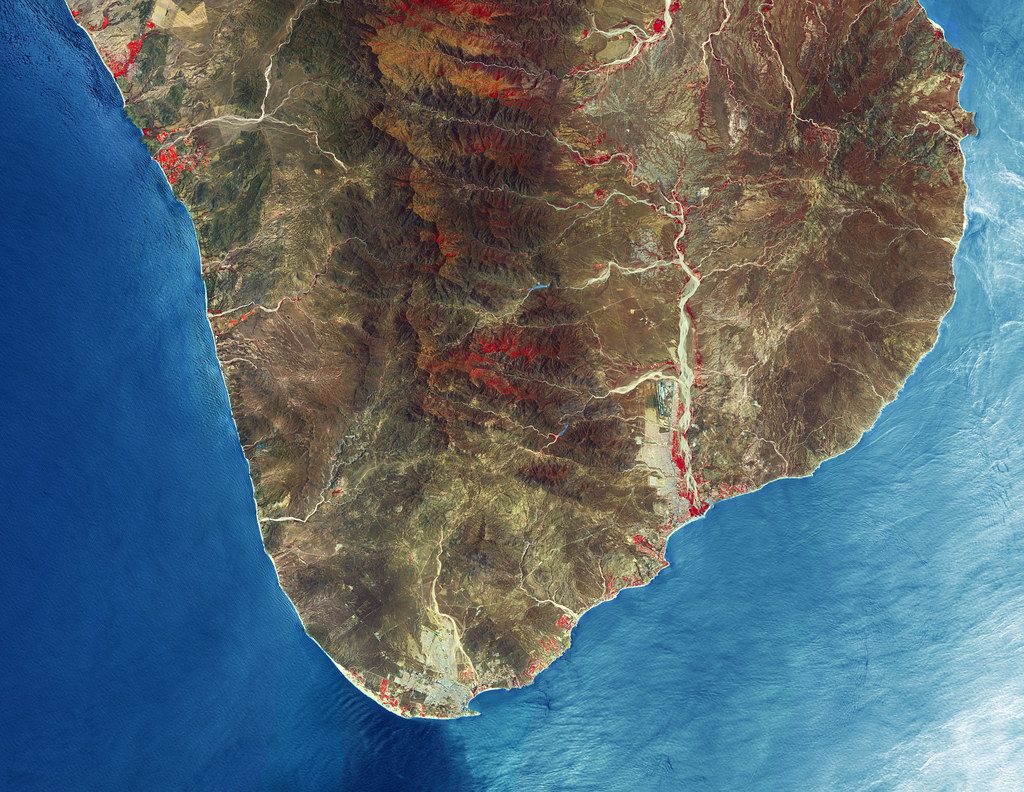 License: Creative Commons - Attribution-Share Alike
Author: European Space Agency
Description:
The Copernicus Sentinel-2 mission takes us over Los Cabos – a municipality on the southern tip of Mexico's Baja California Peninsula. Meaning ‘the capes’ in Spanish, Los Cabos is a region composed of mountains and coastal plains and is largely dry and rocky with over 320 days of sunshine each year. The area encompasses the two cities of Cabo San Lucas (visible in the bottom-left) and San José del Cabo (visible to the right). The area along the coast between the two cities, often referred to as the Los Cabos Resort Corridor or simply the Corridor, stretches around 30 km along the highway and features a plethora of beaches dotted primarily with hotels, resorts and golf courses. The peninsula ends with the Arch of Cabo San Lucas, known locally as ‘El Arco’ or ‘Land’s End.’ This distinctive land formation, carved by winds and waves, is where the Pacific Ocean meets the Gulf of California, also known as the Sea of Cortez. The Arch of Cabo San Lucas is adjacent to Lovers Beach (Playa del Amor) on the Sea of Cortez side and Divorce Beach (Playa del Divorcio) on the rougher Pacific Ocean side. The arch is a popular gathering area for sea lions and is frequented by tourists. A region of mountains dominate the landscape including the Sierra de la Laguna Mountain Range and the Sierra de San Lázaro, which are both formed of volcanic rock with peaks between 400 and 1000 m. The main river in the area is the San José River, visible in the right of the image, and flows north to south primarily during the summer rainy season. The river creates an estuary at its southern end, which is one of the largest in Mexico and is home to both native and migratory birds. This image, which is also featured on the Earth from Space video programme, has been processed in a way that included the Copernicus Sentinel-2’s near-infrared channel, which makes vegetation appear bright red. As the image was acquired on 20 June 2020, the region is particularly dry with little vegetation visible. A comparison showing the high-density of vegetation in the area during the rainy season is available here. Credits: contains modified Copernicus Sentinel data (2020), processed by ESA, CC BY-SA 3.0 IGO