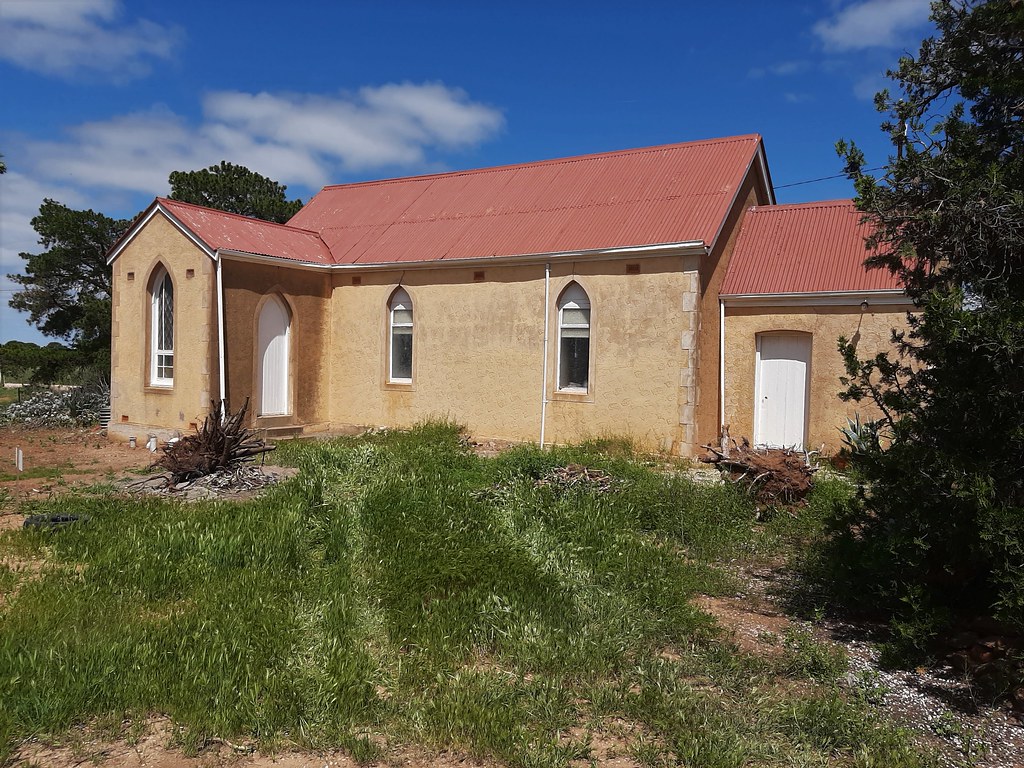 License: Creative Commons - Attribution-No Derivatives
Author: denisbin
Description:
Point Pass. The early Travelling Stock Route between Point Pass and Eudunda was resumed for small farming blocks in the 1880s and 1890s.This would have been the route taken in the 1840s by many overlanders bringing sheep down to SA from NSW via Big Bend (Morgan). Before arrival in Point Pass we see Immanuel Lutheran College and Church. The college was a Lutheran seminary and the head of one of the two major Lutheran synods in Australia (ELSA- Evangelical Lutheran Synod of Australia). It opened in 1894 for the training of Lutheran pastors. The college building was extended in 1899 and again in 1914. Just after the founding pastor George Leidig retired in 1920, the Seminary and College was moved from Point Pass to its current headquarters in North Adelaide (1921). The Lutheran Seminary remains in North Adelaide. The school part of the College remained in North Adelaide until it was moved to Walkerville in 1942. Immanuel College remained at Walkerville until a new college building at Glenelg near Cummins historic house was opened in 1956. The former Immanuel College and Seminary near Point Pass is privately own and was run as a bed and breakfast establishment for many years. As well as the seminary this site also had one of the first Lutheran churches in the region. The impressive Point Pass Evangelical Immanuel Church was built in 1876. The gold topped bell tower and spire were added in 1913. Inside the church contains an historic Lemke pipe organ built in the Barossa Valley by Lemke in 1876. Behind the church is a Lutheran cemetery and beside the church is the Immanuel School. The stone school building was erected in 1909. It seems like a mystery as to why a strongly German settlement area like Point Pass should have an Irish town name especially in the Hundred of English! The explanation lies in the fact that Point Pass was named in 1867 by one of its first residents Anne Richards. The town was sited here because of a water spring and it was named after a locality in Ireland known to Anne called Poynzpass. Anne arrived in SA as Anne Redpath in 1853. Her Irish husband died in 1856 leaving her with a two month old child to support. She remarried two months later in Kapunda before moving to this new location 11 years later. The Hundred covering here and Robertstown and Ngapala was in the Hundred of English. It was declared in 1866 and named by the Governor of the day Sir Dominick Daly (1862-1868) after Thomas English a former Lord Mayor of Adelaide and a politician in the Legislative Council of South Australia between 1865 and 1884. Thomas English was also an architect responsible for many fine buildings around Adelaide. He worked in a partnership with George Soward. His structures include Scots Church North Terrace, Torrens Arms Hotel Mitcham, Townsend House Brighton, Benacre mansion Glen Osmond, Glenara House on the esplanade Glenelg etc. A District Council was based in point Pass from 1878 and a Council Chamber was built in 1887. The hotel was built in 1876, as was the General Store of Carl Friedrich Leditschke (known as C.F.L.) In 1906 he built a new store which still stands. The private German school opened in 1881 and Carl Leditschke was on the town school committee along with others. In 1891 they petitioned the government and the local MP Sir Jenkin Coles to have the school made into a state school and it opened as such at the beginning of 1892. The school closed in 1945 along with many others in the district as Eudunda Area School was established. Trains used to take children from the state school for an annual picnic to Semaphore to see the beach. This happened long after the arrival of the spur line from Eudunda to Robertstown in 1914. St. Peter’s Lutheran Church was dedicated in 1885 with the nearby manse completed in 1887. It first held some sermons in English in 1926 but did not completely cease German language services until 1939. St. Mary’s Anglican Church was started in 1895 but not completed until 1906. Near St Mary’s church is a town memorial and a standpipe from the old springs.