Adelaide. Springfield. f Carrick Hill mansion built in 1939 in the style of an ELizabethan mansion. Built for the Haywood family. Bequeathed to the state of South Australia in 1983. The espaliered pear tree arbor. 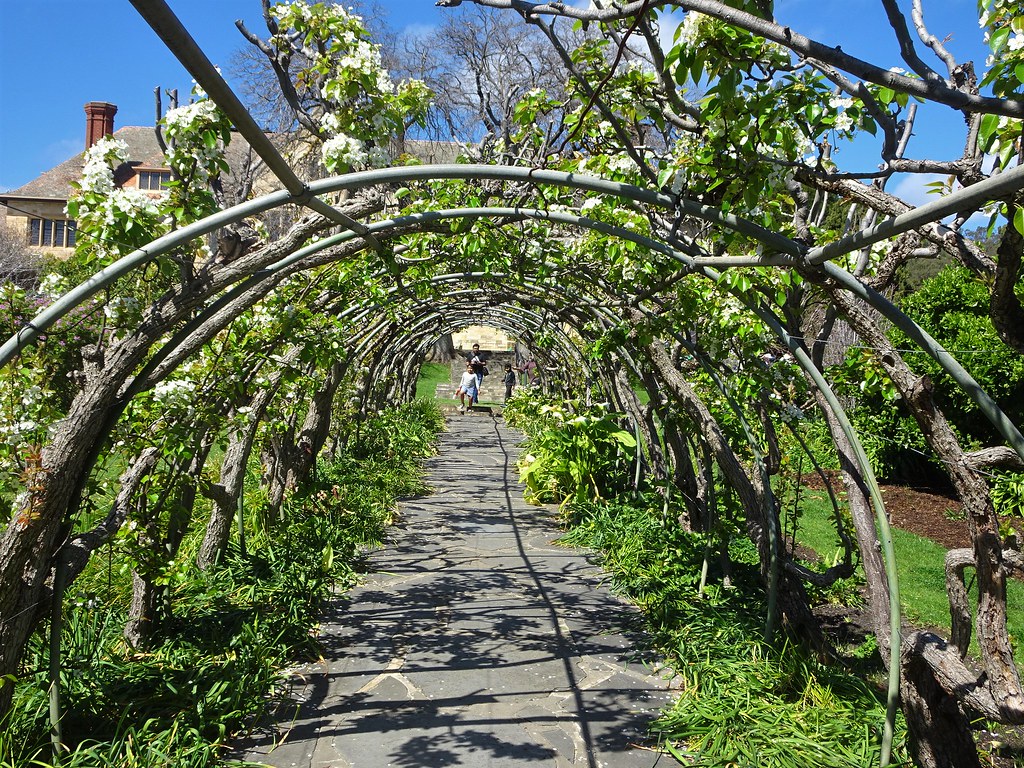 License: Creative Commons - Attribution-No Derivatives
Author: denisbin
Description:
Sir Edward Hayward- Carrick Hill. Sir Edward Hayward was the son of a draper but he married well when he wed Ursula Barr Smith from nearby Torrens Park House- now Scotch College. After schooling, Bill Hayward worked as a jackeroo, and then he purchased a pastoral property at Narrabri in NSW. He later joined the management of John Martins in Adelaide and became director of the company. He inaugurated the Christmas Pageant in 1933. In 1935 Ursula’s father, Sir Thom Barr Smith gave the couple 100 acres (40 hectares) of land at Springfield. Here they had a Jacobean style stone house designed and built with genuine 1546 oak wall panelling, stairs and windows installed from a demolition sale in England. The house was built in 1939 with beautiful gardens. Edward served with distinction during World War Two and returned to establish the Coca Cola franchise in SA. He continued to serve on the boards of John Martins, Coca Cola, Bennett and Fisher, the Bank of Adelaide and other companies until his retirement. He maintained a pastoral property near Cape Jervis until he died at Carrick Hill in 1983. He had no children and he bequeathed his Carrick Hill property and its art collection to the government of SA. The house was designed by an Adelaide architect, Sir James Irwin who also designed part of the Children’s Hospital, buildings at the University of Adelaide, General Motors headquarters at Elizabeth and the previous 1960s Advertiser building in King William Street. He did a fine job of recreating an early 1600s style stone baronial mansion for the Haywards with Tudor style brick chimneys, stone mullions in windows, interesting gables and a fine front entrance and porch. The architecture of the house is set off with beautiful gardens including an espalier pear walk.