Adelaide. Urrbrae. The interior of St Pauls Catholic Church and monastery. Built in 1927. Looking towards the altar from the balcony level. Built in the Romanesque style. Architect Herbert Jory. . 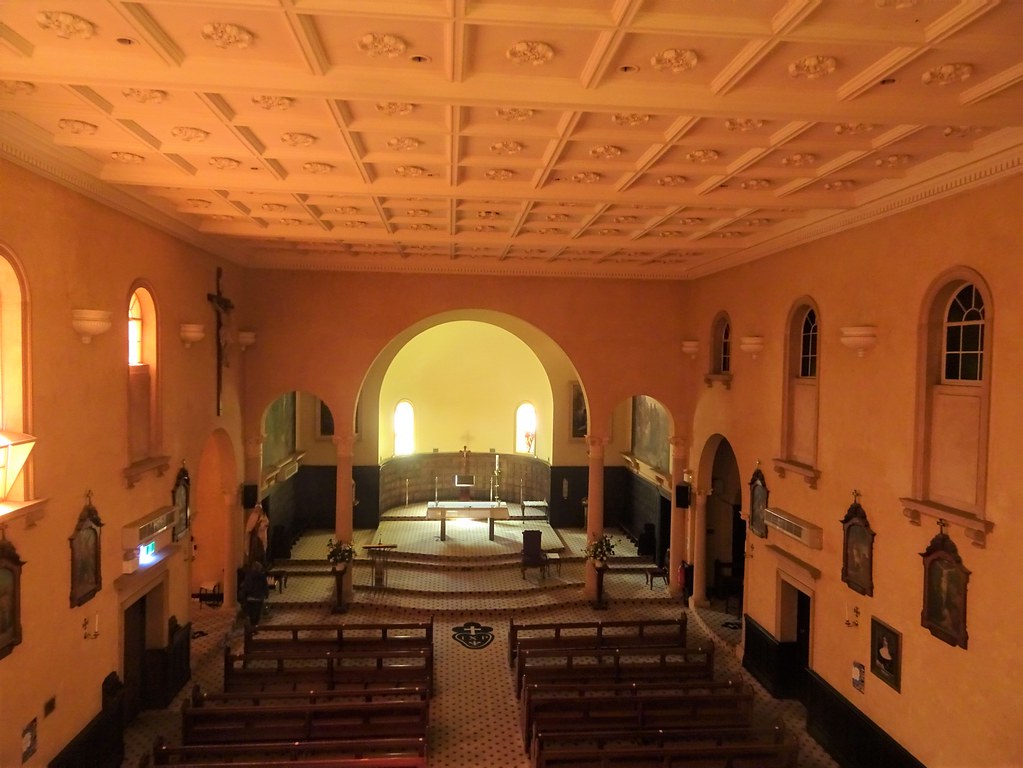 License: Creative Commons - Attribution-No Derivatives
Author: denisbin
Description:
St Pauls Passionist Monastery church and gardens Urrbrae Adelaide. This acreage was originally owned by Arthur Hardy of nearby Claremont House. In 1847 part of his property was sold to Joseph Montefiore and he planted the giant Moreton Bay Fig around the time be built a grand two storey residence called the Glen. In 1855 the residence and property passed to the Boothby family of judges and writers. Members of the Boothby family remained there until it was sold to the Passionist Brothers in 1896 for use as a monastery. At the same time a new residence or bishop’s palace for the Adelaide Bishop was built across the road from the monastery in 1897. This was handed over to the Carmelite nuns in 1935. Meantime across Cross Road Glen House was demolished in 1927 and the new St Paul the Cross Catholic Church was built that year on its site. It opened in 1928. The architect was Herbert Jory who had many commissions for the Catholic Church in South Australia at that time. A new monastery was attached to the church in 1929 and it was also designed by Herbert Jory in the same Romanesque style with Mediterranean influences such as terracotta tiles, arches, long verandas etc. The Australian Passionist Brothers commissioned 14 Carrera marble statues depicting the station of the cross to be built in 1953 for their Goulburn Monastery in New South Wales. They were created in the Ferndinado Palla Studio in Tuscany. All the figures in the statues are half-life size and weigh at least half a ton. It took six to eight months to complete each finely detailed statue and they were shipped to Australia over several years and then trucked to Goulburn. All had arrived by 1955. Each statue cost around £500, a considerable sum in those days when you could buy a suburban house for around £1,000. The Passionist Brothers sold their Goulburn property in 1974 and the statues were kept in storage. In the year 2000 the marble statues were moved to the Passionist Monastery at Glen Osmond. They are complemented there by beautiful gardens with an air of serenity and peace.