The School Ship Dunera, with a notorious past. 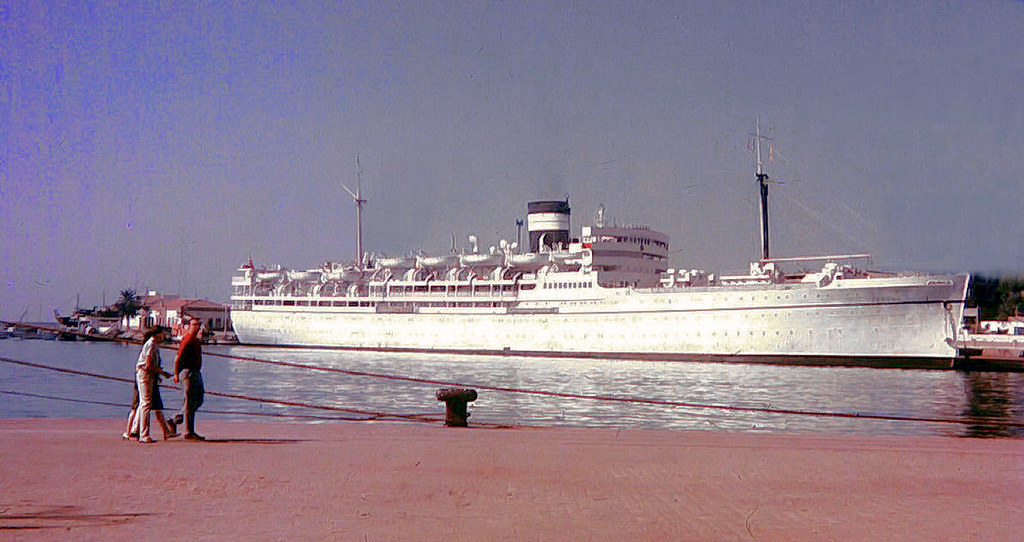 License: Creative Commons - Attribution
Author: Mike McBey
Description:
My photo was taken in Malaga, Spain, in the summer of 1967. I was on a "School Cruise" along with about 800 other kids from Scotland. For many, like me (aged 13) it was the first time we had gone abroad without parents. (There were teachers with us to keep us from trouble!). The Dunera also had a varied past - part of which was very bad. As the HMT Dunera she was used in 1940 to transport many Austrians, Germans, and Italians who had been living in the UK and who were suspected of being enemy agents, potentially helping to plan the invasion of Britain. A decision was made to deport them. Many of them were Jews who had fled from Germany. On 10 July 1940, 2,542 detainees, all classified as "enemy aliens," were embarked aboard Dunera at Liverpool and she set sail for Australia, taking 57 days. The conditions that the deportees were kept in onboard were deplorable and they were very badly treated. On arrival in Australia the conditions of the voyage were discovered and a scandal ensued. Several of the army guards from the ship - including their Commanding Officer - were punished. The matter was also raised in the British House of Commons and the notoriety of the voyage became well known. The deportees later became known as "The Dunera Boys". In 1985 a film of that name was made telling the story of the shocking voyage. Much more information is here: en.wikipedia.org/wiki/HMT_Dunera and here: www.duneraassociation.com/ ---------- Jumping forward to 1967, we schoolkids were blissfully unaware of the ship's past and had a great time visiting Vigo, Lisbon, Malaga and Gibraltar. It was only much later that I discovered the sad story of the ship. The photo was taken with a Kodak Instamatic 104 camera. Older people may remember them ...