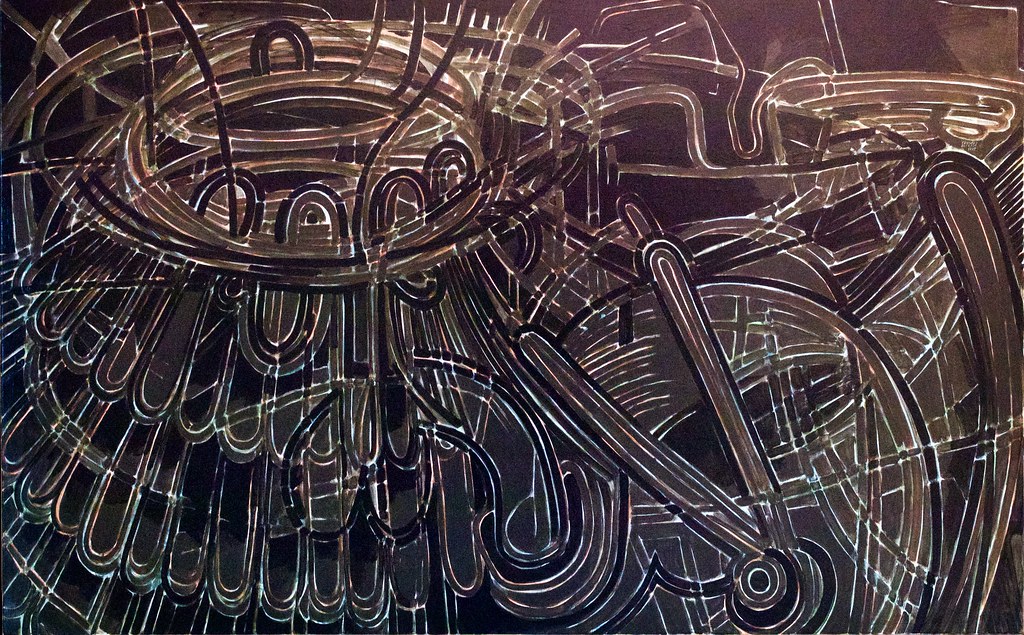 License: Creative Commons - Attribution
Author: Pedro Ribeiro Simões
Description:
Galeria 111, Campo Grande, Lisbon, Portugal Material: Acrylic on canvas Collection BIOGRAPHY Eduardo Batarda was born in Coimbra in 1943. There he started studying medicine in 1960 but dropped out three years later. He studied painting at the Fine Arts Academy in Lisbon (1963-1968) and then went on to attend the Royal College of Art in London (1971-1974) with a scholarship from the Calouste Gulbenkian Foundation. This period was decisive in securing a tendency, already perceptible in his first paintings and from there on systematically present in his work, to think art, and the function, history and theory of art, within painting itself. In 1978 Batarda became a professor at the Fine Arts Academy in Oporto. He designed the sets for two productions for the Theatre Cornucópia, Oberösterreich [Upper Austria] by F.X. Kroetz (1976) and Capitaine Schelle, Capitaine Eçço by Serge Rezvani (1980). In 1986 he won the “telegraphic” award of the Portuguese artistic movement Homeostética. He undertook two tapestry projects (for Lisbon’s Constitutional Court, 1988, and for the European Union’s headquarters in Brussels, 1992-1995) and the mural design for the underground station of Telheiras in Lisbon (1994-96). His painting series Hispania Romana was integrated into the stage design for Shakespeare’s The Tragedy of Coriolanus (1998), directed by Jorge Silva Melo. That same year, the Modern Art Centre – Calouste Gulbenkian Foundation hosted a retrospective exhibition, organized by Alexandre Melo. In 2007 he received the EDP award. Batarda has regularly held individual exhibitions at the Gallery 111 in Lisbon and has been represented in several collective exhibitions. Between 1964 and 1968 Batarda produced several paintings on canvas and wood, firstly in oil and subsequently in acrylic, once this medium became available in Portugal in 1965. These paintings, or part of them, are frequently partitioned using a comic-book-like organization, using this compartmentalization to agglomerate disparate themes (political, artistic, literary and vernacular) at the same reading level. This influence from graphic art, publicity and propaganda are also visible within the formal composition and choice of colours (red, black, blue, green and white). During his years under military service (1968-71), he illustrated various books and made the drawings for O Peregrino Blindado (The Blind Penguin), an artist book published by the Gallery 111. In that same year, he applied to a scholarship from the Calouste Gulbenkian Foundation to study at the School of Painting in the Royal College of Art in London. Being tutored by Peter Blake and Peter de Francia, among others, he received the MaRCA diploma in 1974, as well as the Sir Alan Lane award (art criticism, 1973) and the John Minton award (painting, 1974). In his London period, in the wake of British pop and at the height of experimentalism and conceptualism, Batarda perfected his watercolour technique, by saturating colours and recurring to a figuration borrowed from American underground comics. Thus he would draw, with an ever-increasing attention to detail, a network of references to art, politics, popular culture and his own life and experiences, as a critical commentary laden with allusions. He used the watercolour technique consciously for its conventional relegation to a less prestigious realm, and both this technique along with the painstaking quality of execution contrasted to an at times explicitly pornographic thematic. For his watercolours the preparatory sketches are executed and re-executed countless times until they reach a self-imposed quality, and only then did Batarda allow for the paint to come into play. Moreover, they contained numerous inscriptions, often puns playing with the figures in the work, multiplying the levels of meaning. The paintings from this epoch have been described by the painter as “permanent commentaries on the state of the arts”. Between 1974 and 1975 he endeavoured in art criticism in the satirical weekly Sempre Fixe, where he took advantage of its humoristic vein to write impetuous and caustic texts whose arguments revealed a deep critical thinking of art. In the 80’s Batarda returned to the medium of acrylic, firstly still applying chromatic variations and recognizable figures, later progressively diluting these figures in a thickening of painted layers. The works dating from this period are created without any preparatory sketches, executed as improvised creations obliterated and covered by new improvisations, resulting literally in paintings over paintings. Within these works, the colours of the first layers scarcely appear, dominated by dark tones that draw out interwoven lines and curves in an ever-increasing complexity. Finally, a thick layer of varnish is applied, as an intentionally excessive finishing. With the exception of a few works from the end of the 90’s in which, still in acrylic and maintaining conventional forms, Batarda widens his range of colours and inscribes phrases and expressions, his paintings become ever more opaque. His most recent work no longer allows for the underlying layers to be seen, presenting instead a final cut-out figure against a monochromatic background. The sarcasm of his watercolours still remains present, but ever more implicit. According to the painter himself, his commentaries on art, in general, were progressively confined to a commentary on his own art. He wrote several texts for the catalogues of his individual exhibitions, in which the self-deprecating tone doesn't hide the erudition that underlies his work. Throughout the years, a citation or mention of an inscription in a self-portrait of the Baroque painter Salvator Rosa sporadically appears in his texts: “aut tace, aut loquere meliora silentio”. Mariana Pinto dos Santos May 2010 SOURCE: gulbenkian.pt/museu/en/artist/eduardo-batarda-2/