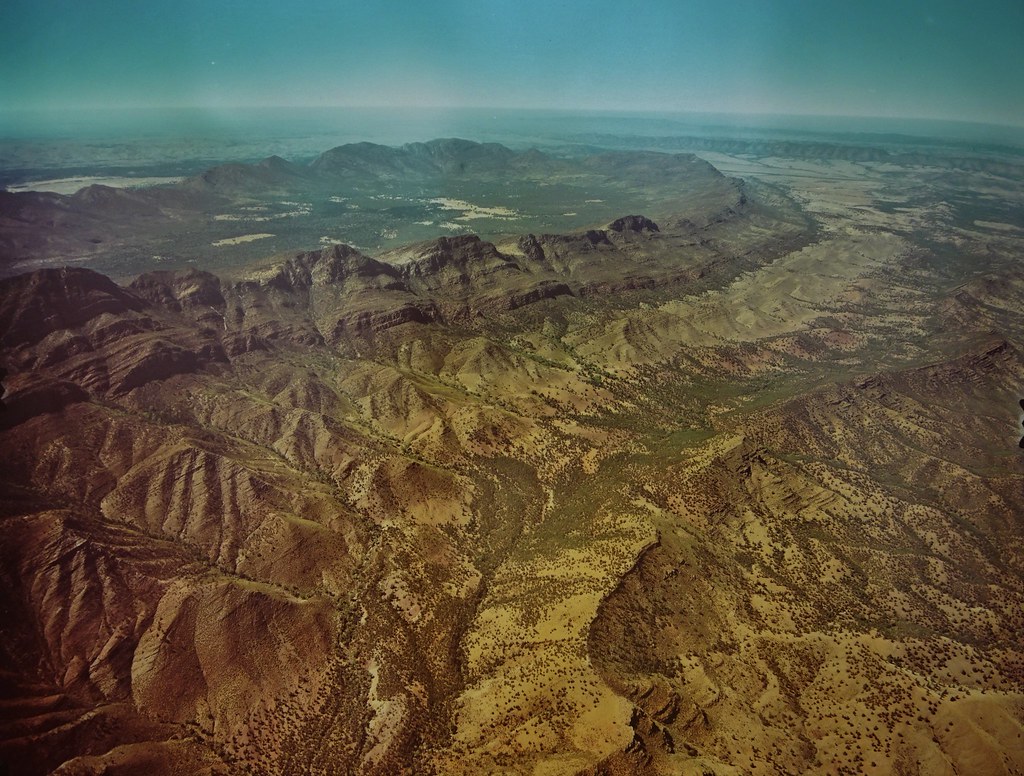 License: Creative Commons - Attribution-No Derivatives
Author: denisbin
Description:
Wilpena Pound. For this northern latitude Wilpena Pound has a good rainfall and a microclimate because of the surrounding hills. It was always a special place for Aboriginal people and a prized location for sheep pastoralists. At Cradock they average 250 mms annually, Hawker rises to 300 mm and Wilpena has 390 mms (15 inches in the old rainfall). Further north at Marree the average is just 136 mm a year. Wilpena Creek flows out of the Pound which covers 80 square kilometres (20,000 acres). It is 6 kms wide and 16 kms long and its highest surrounding peak is Mt Mary at 1,171 m or 3,842 feet. Although Edward John Eyre in 1840 and others explored parts of the Flinders Ranges they did not discover Wilpena Pound. That was achieved by C Bagot in 1851. Bagot said in the press that there was only one ingress or egress to flat land with a permanent running creek suitable for depasturing 500 cattle. This plain was surrounded by steep rocky walls up to 1,000 feet high. The government responded by immediately sending Mr Burr of the Survey Office to the Pound for a trigonometrical survey in June 1851. Bagot gave it its aboriginal name. The furthest north leasehold run in 1851 was at Kanyaka between Quorn and Hawker. The Wilpena run was taken out in 1851 and originally covered 850 square miles but that was soon reduced into other leaseholds. Drs William and John Browne took the original leasehold and by 1853 the pine slab homestead was built (demolished 1931) and shearing sheds and workers cottages soon followed. George Marchant got a 14 year lease of 85 square miles on 1 January 1855. In 1857 he employed a manager Charles Powell, whose father had planted the first mulberry tree at Kingscote in 1836, and he stayed at Wilpena station until 1882 but with various owners. By 1860 Dr William J Browne held Wilpena run and he sold off the Arkaba section in 1863 before the big drought. By 1861 Henry Strong Price owned the leasehold which he tried to sell but could find no buyer. A report on Wilpena in 1865 says it covered 154 square miles and employed 19 married men and their wives, 24 single men and 41 children making a total of 101 people. Later in the 19th century Dr William J Browne owned Wilpena again and the government resumed most of it in January 1880. Tourism almost came to Wilpena Pound in 1920 when the Wilpena Forrest Reserve was created but the run was leased to graziers until 1945. At that time the Rasheed family established the chalet and all grazing in the Pound ceased. In 1970 adjoining Orraparinna station was purchased by the government to create Flinders Ranges National Park. Finally in 1985 the government bought the leasehold to Wilpena station to add to the park. Its name was changed from Flinders National Park to Ikara Flinders National Park in 2016 thus incorporating an Adnyamathanha word from the traditional land occupiers into the title. The Adnyamathanha people and their sub clans have been in the area for around 15,000 years. The Pound is a natural amphitheatre with Rawnsley Bluff at the southern end (he was the surveyor of runs in the 1850s). The Pound has a fascinating geomorphological structure. The landscape here was deeply folded with synclines and anticlines. Synclines are downward folds of earth layers with a trough at the bottom i.e. Wilpena Pound. Anticlines are the peaks of the layers but in the Flinders Ranges the anticlines have been eroded away over vast geological eras leaving rugged edges above the synclines or troughs. The trough of Wilpena Pound has a layer of quartzite, then other layers beneath that. The end of the anticline from the western side of the Pound is the Elder Range. The true shape of the formation reveals itself from aerial photographs.