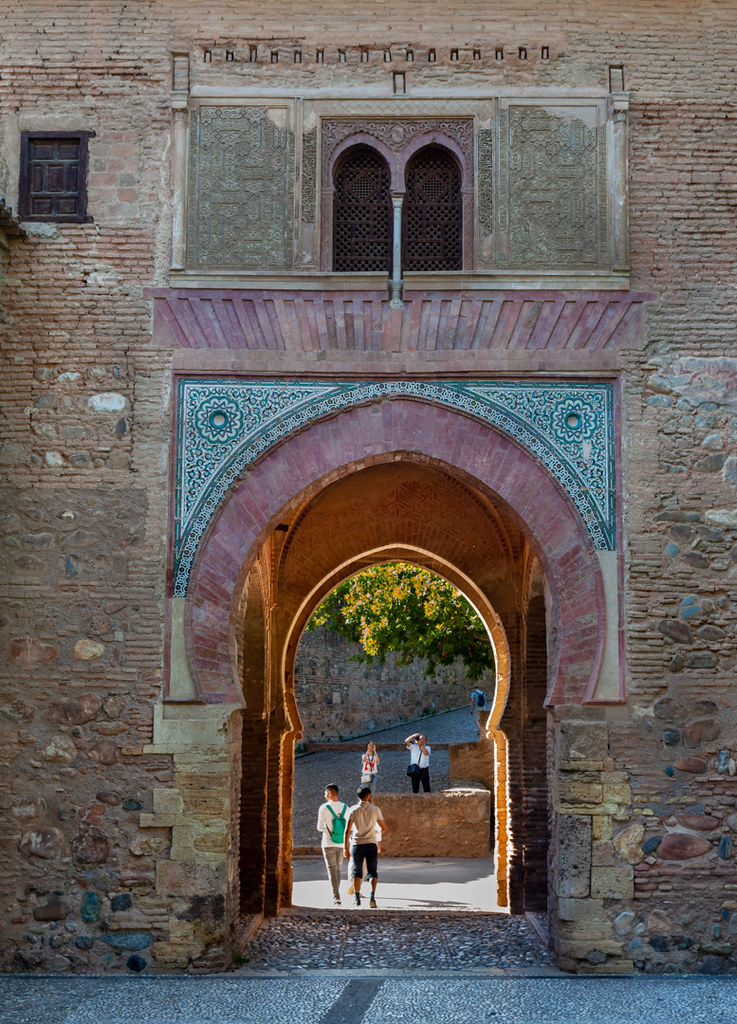 License: Creative Commons - Attribution
Author: Paul VanDerWerf
Description:
The gates in the Alhambra have names and this one is the Wine Gate. Details are below. The Wine Gate (Puerta del Vino) is supposed to be one of the oldest constructions of the Alhambra, it could date from the period of Mohammed II. Since 1556, the neighbours of the Alhambra left at this gate the wine that they drunk and which was not submitted to taxation. This is a possible explanation for the gate's name, although there is another theory, according to which the name is the result of a mistake. Apparently two words got muddled up: «Bib al-hamra'», meaning Red Gate or Gate to the Alhambra, which would be the original name of the gate, and «Bib al-jamra», meaning Wine Gate. This second theory would then prove that this was the access gate to the higher Alhambra. The exterior façade of the gate is the oldest part and it has a pointed horseshoe arch and embossed voussoirs. A symbol appears on its lintel: a key with a cord and a plasterboard with the following text: «Glory to our Master the Sultan Abu 'Abd Allah al-Gani Billah» (Mohammed V). On this façade is a twin balcony, as is the case of the back façade of the gate, which was built later on. On the back façade visitors may admire an arch with scallop with polychrome brick decoration. On the arch there is a lintel with voussoirs, which gives support to the second body, where the twin balcony is and on the crossing of its arch is the coat of arms of the Nasrid kings and the following text «Only God is Victor».