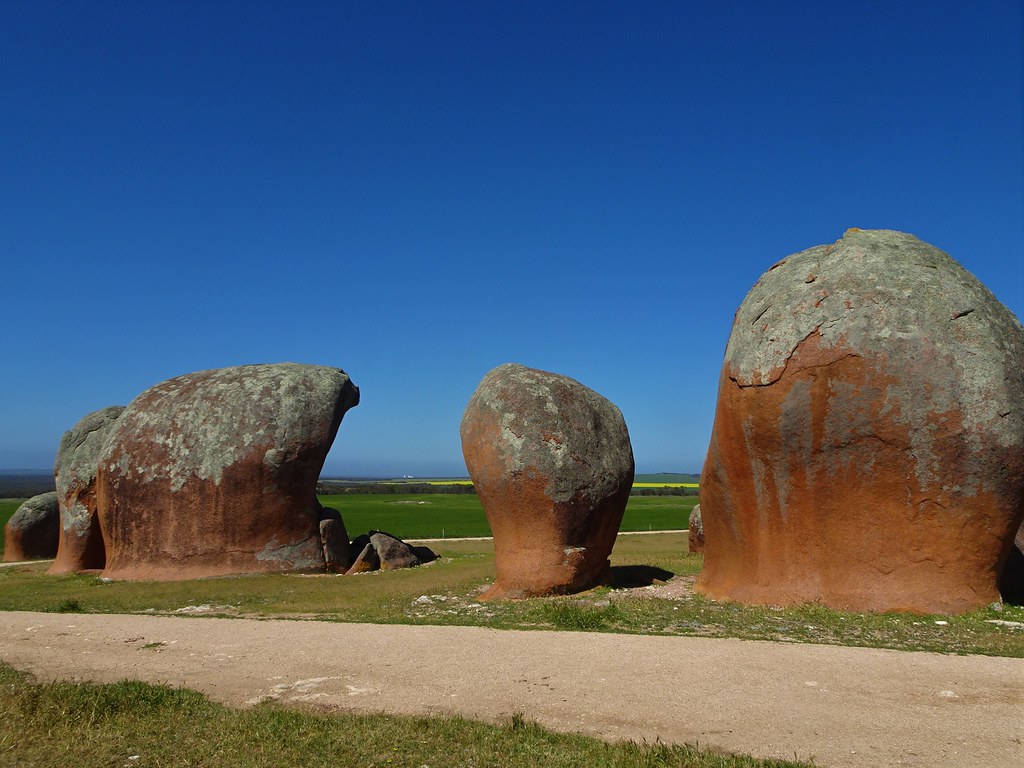 License: Creative Commons - Attribution-No Derivatives
Author: denisbin
Description:
Murphy’s Haystacks and Point Labatt. The so called haystacks rocks are a series of dramatically weathered granite outcrops which are possibly as much as 1,500 million years old. They were named after Dennis Murphy the original landowner on whose property the rocks are located. The pillars are tall rocks with concave shapes that are now detached from the underlying bedrock. The pillars and boulders have side walls that are flared in shape. The flared shapes are the result of weathering by soil moisture from just beneath the land surface and along fractures. Because the near-surface soil dries out in summer the weathering is slower at the junction of the rock and soil compared with deeper down where soil moisture is always present. As wind erosion has removed surface layers of soil the exposed pillar walls emerge as concave in shape. In some cases the flared slope has advanced toward the centre of the rock from all sides to such an extent that the tops of the rocks are much wider than the remaining core near the soil surface. Point Labatt Conservation Park was created in 1973 to protect the landscape and more importantly to protect the endangered Australian sea lion colony there. The high cliffs at Point Labatt protect the baby sea lions and the colony in general. The males travel hundreds of kilometres but the females always return here to give birth to their pups. The males are very aggressive during birthing season which is always 18 months apart on mid-winter one year and mid-summer the next. Pups are about 7 kilos in weight when born and they rely on their mother’s milk for the first year. Then they start fishing. Baby pups just four weeks of age go out into the sea for play but they are not searching for food. Calca. The land here was illegally occupied by James Baird before 1850 and he called it Calca after the Aboriginal word of Kolka meaning stars. Baird was killed by Aborigines around 1850 and the first official lease was taken out in 1856. After Baird’s death a police investigating party including the Protector of Aborigines visited the Aboriginal people at Baird’s Bay and one Aboriginal was shot for the murder. Several others were induced to go to Port Lincoln for a trial but there is no evidence that any trial occurred. Flour was distributed to the Aboriginal people when the party left the area and all attempts were made to restore friendly relations with the local Aboriginal people. In 1857 Calca’s police trooper was the most distant from Adelaide in the colony. He was one of five officers on Eyre Peninsula. In 1864 there were 8,000 sheep on Calca station and in 1881 there were 15,000. The leasehold was resumed in 1883 for farming settlement but this did not happen till 1886 because a public campaign opposed opening these lands as they were too marginal. The government delayed as this was when famers were walking off marginal lands beyond Goyder’s Line on the Willochra Plains as the high rainfall of the 1870s returned to normal low rainfall. By 1892 there were 60 voters on the rolls. Calca had a cemetery opened in 1896. Its school opened in 1892 and closed in 1939. The Institute foundation stone was laid in 1893. Plans for an Anglican Church emerged in 1909 but never came to fruition and the Anglicans held services in the hall. The Catholics started work on their church in December 1929 with P O’Connor as the architect.