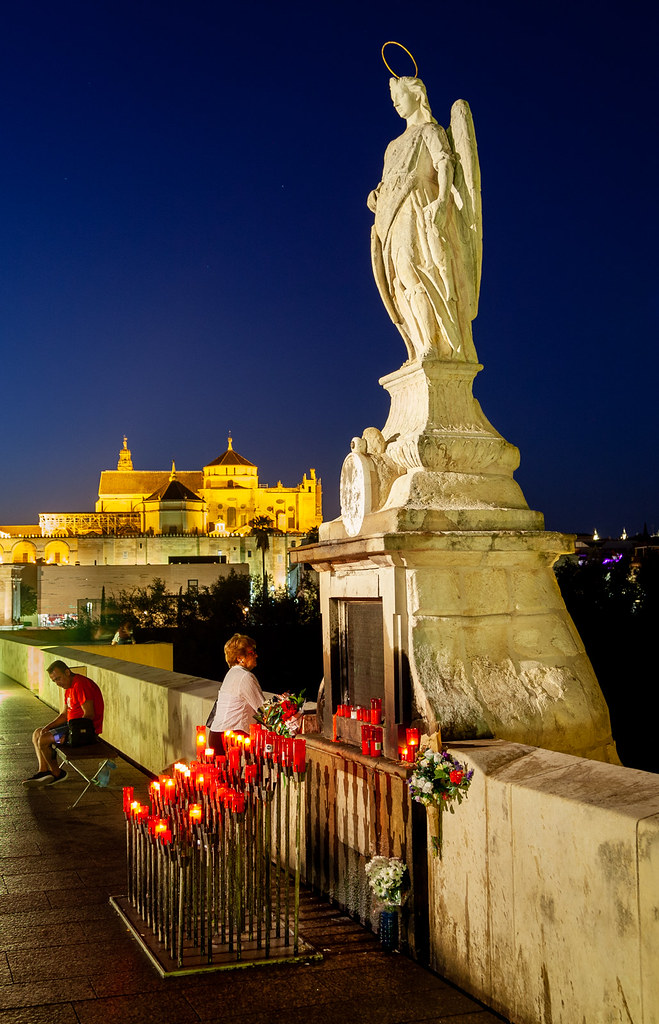 License: Creative Commons - Attribution
Author: Paul VanDerWerf
Description:
This sculpture of San Rafael is near the middle of the Roman Bridge that crosses the Guadalquivir River. In front are a number of votive candles a number of which were lit by the woman in white behind them. In the distance is the Mequita or mosque-cathedral; I have previously uploaded some photos from that site. Below are a few more details about this bridge and the angel San Rafael. The Roman bridge (Ponte Romano) of Córdoba is a bridge in the Historic centre of Córdoba, Andalusia, southern Spain, originally built in the early 1st century BC across the Guadalquivir river, though it has been reconstructed at various times since. Most of the present structure dates from the Moorish reconstruction in the 8th century. The bridge was built by the Romans in the early 1st century BC, perhaps replacing a previous wooden one. It currently, after the Islamic reconstruction, has 16 arcades, one fewer than originally, and a total length of 247 meters. The width is around 9 meters. During the early Islamic domination the Muslim governor Al-Samh ibn Malik al-Khawlani ordered a bridge to be built on the ruins of what was left of the old Roman construction. In the Middle Ages, the Calahorra Tower and the Puerta del Puente were built at the bridge's southern and northern ends, respectively (the latter is now a 16th-century reconstruction). The bridge was reconstructed and expanded to its current size. The arches depict the famous Moorish architecture that dominates the city's scenery. In the 17th century, a sculpture depicting St. Raphael was put in the middle of the bridge, executed by Bernabé Gómez del Río. During its history, the bridge was restored and renovated several times (in particular in the 10th century), and now only the 14th and 15th arches (counting from the Puerta del Puente) are original. It was extensively restored in 2006. [Wikipedia] St. Raphael is one of the seven Archangels who stand before the throne of the Lord, and one of the only three mentioned by name in the Bible. He appears, by name, only in the Book of Tobit. Raphael's name means "God heals." This identity came about because of the biblical story that claims he "healed" the earth when it was defiled by the sins of the fallen angels in the apocryphal book of Enoch. People of Cordoba believed, that their guardian angel Raphael saved them from the plagues.