Minnipa. Eyre Peninsula. The wave like eroded features of Pildappa Rocks. It is a giant granite inselberg like Uluru. 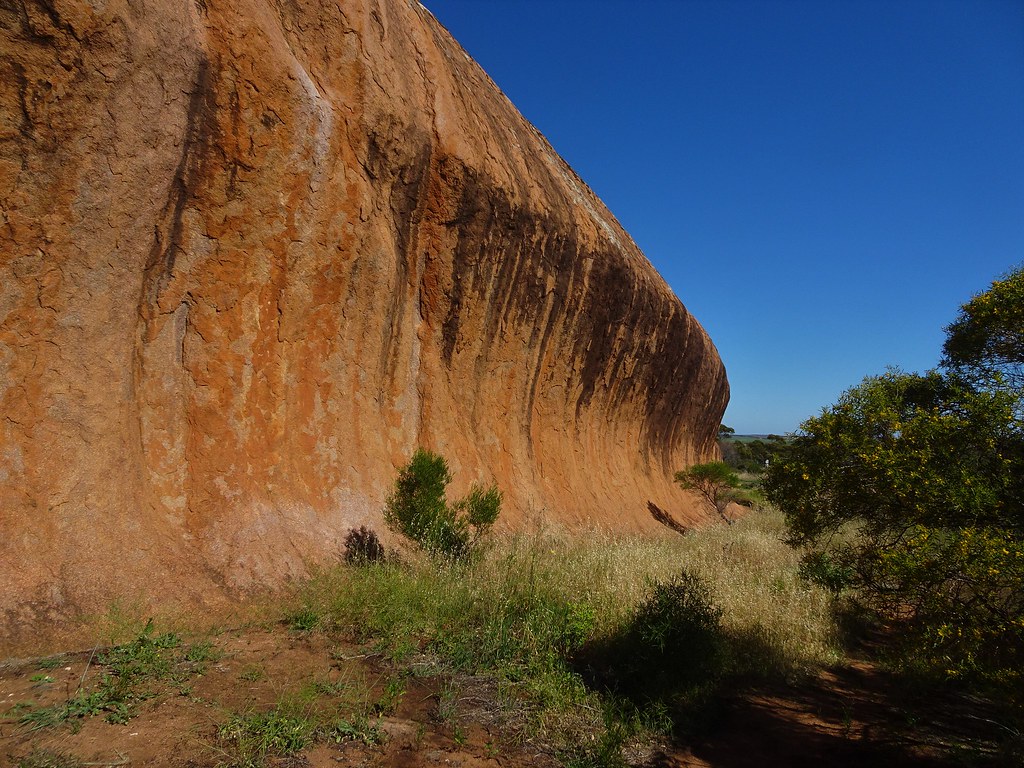 License: Creative Commons - Attribution-No Derivatives
Author: denisbin
Description:
Minnipa. Pastoral occupation in the Minnipa area began in 1861 and was terminated in 1912 with lease resumptions and surveying of farming blocks. This small township was established in in 1916. Just to the north of the town is a granite hill or inselberg called Pildappa Rock. It is a dramatic curved and multi coloured rock hill very similar to the famous one at Wave Hill in Western Australia. Also on the outskirts is a government agricultural research centre as Minnipa is within the grain belt of Eyre Peninsula. The arrival of the narrow gauge railway from Port Lincoln was important in the founding of the town. The line was surveyed in 1911 as the Minnipa Hill line. The line was soon extended westwards to Ceduna and the deep sea port at Thevenard. Minnipa is like a railway watershed as grain grown west of Minnipa is railed to the intentional port at Thevenard whilst grain grown to the east is railed southwards to Port Lincoln. Minnipa is also known as the gateway to the Gawler Ranges which lie to the north of the town. The railway reached Minnipa in 1913 opening the region up to grain farmers. The town was declared a government town in 1915. The town is a grid pattern with surrounding parklands with the railway line being on the southern boundary. The Agricultural Research Centre conducts experiments on grain growing in low rainfall areas like Eyre Peninsula. It was established in 1915. Because rainfall is relatively low a water supply for the town was needed and in 1916 the Engineering and Water Supply Dept. (now SA Water) constructed a small concrete wall around another nearby granite inselberg Pildappa Rocks to collect rainfall run off from the inselberg. Water was used for the town and for the railway steam engines. Piped water from the Tod Reservoir near Port Lincoln reached the town in 1925 to provide reliable water supplies but it has since been replaced by a pipeline from the Murray River. The grain silos at the railway station were built in 1962 with more erected in 1968. Eventually 17 railway workers cottages were built in the town from 1922 onwards. Five stone cottages were built in 1950 and remain but the timber framed ones have gone. A school opened in Minnipa in 1919 and closed in 1976 when nearby Karcultaby Area School was opened to replace a number of small rural schools. At the beginning the school operated in the local hall until the school building was erected in 1925 which has since become a pre-school. In its heyday the town also had a Post Office (the first official Post Office was built 1934), a Police Station (1924), the stone hall (1920 and a new one built in 1967), a State Bank (1927) and the Lone Pine Hotel (1923). Today it still has a Community General Store, a Catholic Church built in 1937 with a tower at a cost of £2,000 and a modern Anglican Church built in 1958 although services had been held in the hall since 1935. In 1991 the Anglicans joined with the Uniting Church but this joint church closed in 2009. The town also has a butcher, a bookshop, a tyre and spare parts shop, a rural supplies store, an oval ,swimming pool and caravan park, a Freemasons Hall (1936) and a couple of farm engineering works and a Country Fire Service station. The Agricultural Research Centre is the main employer in the town with 21 staff working on the 2,500 acre cropping property. Minnipa has around 320 mm of rain a year with most falling in the grain growing season from April to October. Minnipa also once had a wooden railway station for passengers. The District Council of Minnipa was established in 1925 after a public meeting of townspeople from both Minnipa and Wudinna and from its inception Council meetings were held in Wudinna. In 1932 to reflect the growth of Wudinna the council was changed to Le Hunte District Council named after a Governor of South Australia, Sir George Ruthven Le Hunte. In 2008 the district Council changed its name to Wudinna District Council.