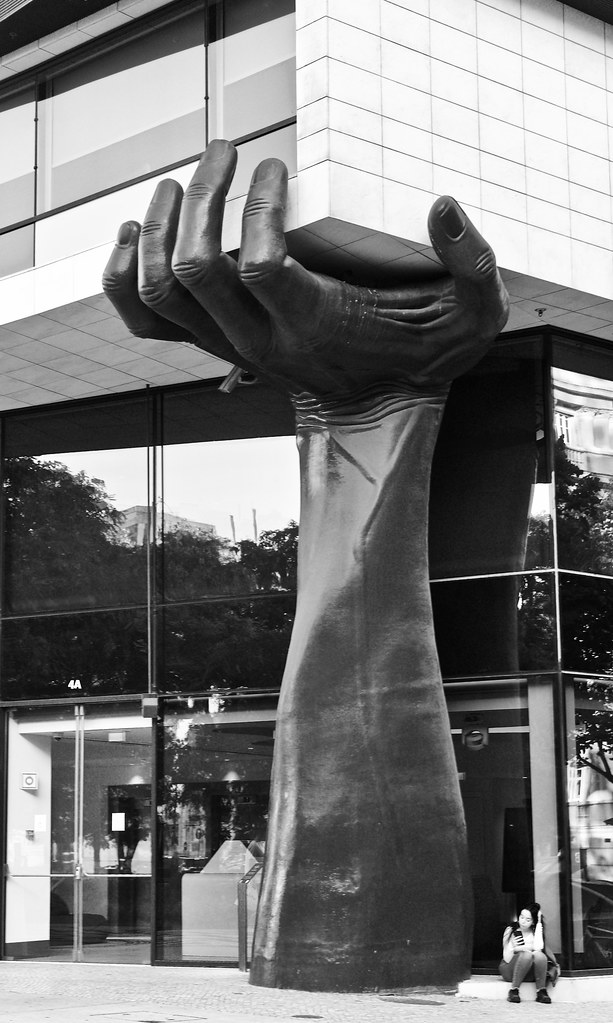 License: Creative Commons - Attribution
Author: Pedro Ribeiro Simões
Description:
Praça do Saldanha, Lisbon, Portugal Material: Fiberglass, Polyester resin & metal Collection: [Public Art] Note: "The turning point in human evolution is something perpetual" Franz Kafka BIOGRAPHY Born in Lisbon, 1964. Spent 13 years in Canada, in the periods of 1975/1979 and 1981/1989. Attended the Plastic and Graphic Arts programme at Dawson College and studied the techniques and methods of Betty Edwards’ «Drawing from the Artist within» and «The Natural way to draw» by Nicolides, in Montreal. In the interim of his two-year stay in Portugal, he works under the guidance of the portrait artist Francisco de Oliveira. His first contacts with the artistic and cultural scenes took place in Montreal, where he had his first exhibitions. He returns to Portugal in 1989 setting up the bases of the Atelier of Artistic Development — Arcos Gallery (Oeiras) which he will consolidate in 1992. In 1993 he is co-founder of the Group Artitude (with Luis Vieira-Baptista, Magnus de Monserrate and Victor Lages). His cultural and professional artistic activities on the market have become autonomous and have evolved since then, yet without losing the individual and close contacts that emerged with the most gratifying synergies of the Group. He was a member of ANAP — National Association of Plastic Artists (ALAP/UNESCO) until 2003. He’s been invited to represent Portugal in the International Event «United Buddy Bears», in Berlin, Germany, exhibition of BBB in Kitzbuehel, Austria and all over the world. He also participated in the Fair Import shop, «Oceans of Cultures» through Arte Viva, Berlin, Germany. In 2004 together with the sculptor Rogerio Timóteo he inaugurates the art space Gepigai for the Ministry of Internal Administration in Lisbon, and participates in the Fair of World ART+DESIGN, at the Berlin Fair represented by Arte Viva, " Under Different Skies". He is represented by the Linhares Art Directory 2005-2006. He was represented by 4 Portuguese Galleries with 16 Paintings at the III Fair of Contemporary Arts in Estoril. — 2005 He exposed in Atlantic Pavilion, (Parque das Nações) in Lisbon and in Europarque in Sta Maria da Feira (Porto) through Epal and Grundfos. −2005 and in Casino of Estoril trough «CEDEMA» (Parents and Friends of Adult Mentally disabled) for solidarity purposes, sponsored by the Portuguese President: Dr Jorge Sampaio — 2005 Represented by Galveias gallery in Fil, Contemporary Arte Fair «Arte Lisboa» in 2005-2007 Two movies made by Álvaro Queiroz at his studio are included in the Cinematic Portuguese Archives (ANIM) (National Archive of Motion Pictures) He was commissioned to execute the portraits of the last and present Mace Bearers of the Order of Nurses of Portugal-2007 Presented an individual exhibition at the (Museum) Cordoaria Nacional as part of the Alternative Fair of Lisbon — 2008 He is prized with a medal of honour in the Wine Museum of Bairrada — 2008 Centro Cultural do Sardoal — 2009 Galerias Passepartout EXHIBITIONS He has had a total of more than 220 exhibitions, divided into: 42 individual shows, 35 group shows with and without the Group Artitude (21 integrated in activities of the Group Artitude between 1993/03). Further he participated in more than 165 collective exhibitions from 1983 to 2008. SOURCE: gustavofernandes.pt/biography.html