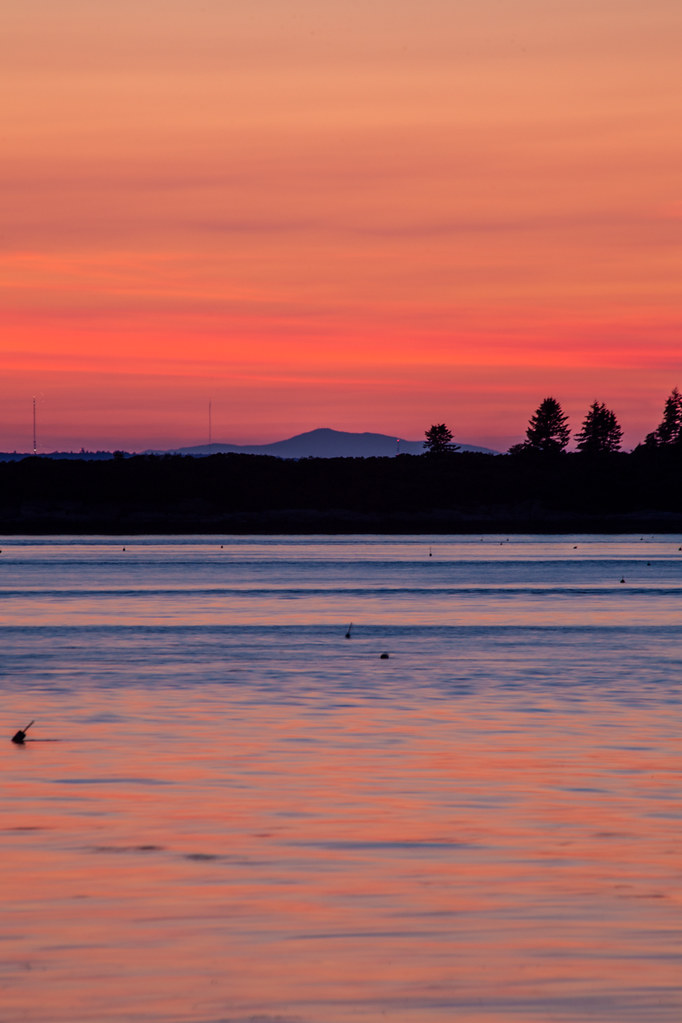 License: Creative Commons - Attribution
Author: Paul VanDerWerf
Description:
I took this last evening at Basin Point near the popular Dolphin Marina and Restaurant. The conditions were perfect to see distant Mt. Washington against the red sky. It is about 65 miles (105 km) to this mountain. Mount Washington, called Agiocochook by some Native American tribes, is the highest peak in the Northeastern United States at 6,288.2 ft (1,916.6 m) and the most topographically prominent mountain east of the Mississippi River. The mountain is notorious for its erratic weather. On the afternoon of April 12, 1934, the Mount Washington Observatory recorded a windspeed of 231 miles per hour (372 km/h) at the summit, the world record from 1934 until 1996. Mt. Washington still holds the record for highest measured wind speed not associated with a tornado or tropical cyclone. The mountain is located in the Presidential Range of the White Mountains, in the township of Sargent's Purchase, in Coös County, New Hampshire. While nearly the whole mountain is in the White Mountain National Forest, an area of 60.3 acres (24.4 ha) surrounding and including the summit is occupied by Mount Washington State Park. The Mount Washington Cog Railway ascends the western slope of the mountain, and the Mount Washington Auto Road climbs to the summit from the east. The mountain is visited by hikers, and the Appalachian Trail crosses the summit. Other common activities include glider flying, backcountry skiing, and annual cycle and running races such as the Auto Road Bicycle Hillclimb and Road Race. [Wikipedia]