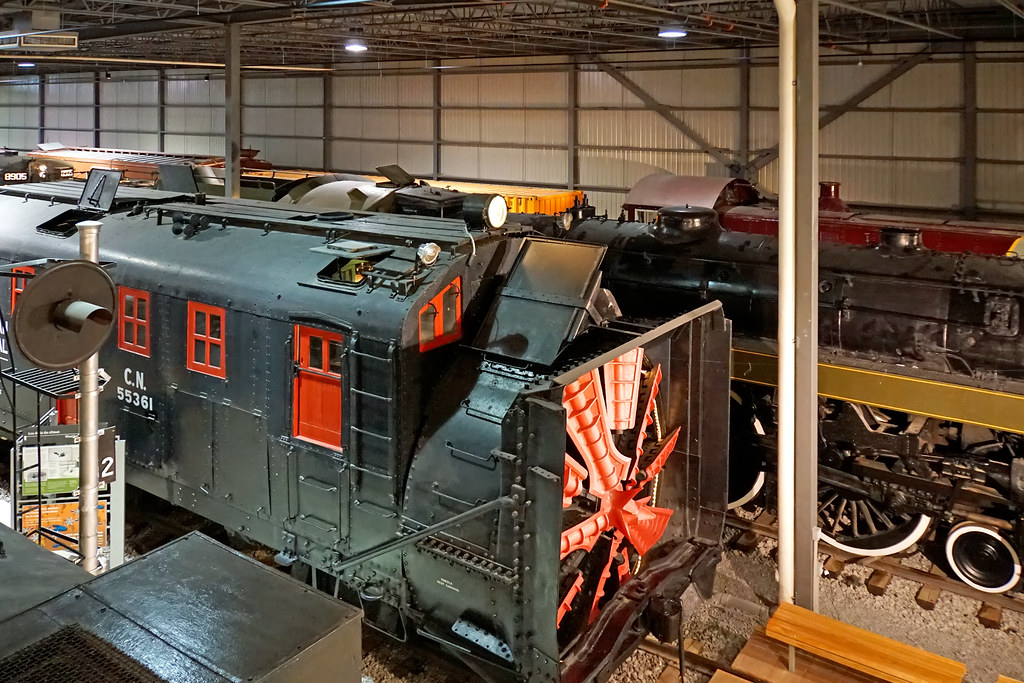 License: Creative Commons - Attribution-Share Alike
Author: Dennis Jarvis
Description:
PLEASE, NO invitations or self promotions, THEY WILL BE DELETED. My photos are FREE to use, just give me credit and it would be nice if you let me know, thanks. Looking down on displays from a balcony at the museum. The rotary snow plough was invented by J. W. Elliot, a Canadian dentist. Used chiefly in the Canadian Rockies, the rotary snow plough could handle any kind of snow on the tracks, in any quantity. A steam engine provided the motive power for its powerful rotating blades. To move forward, the snow plough was pushed by one or two locomotives, also propelled by steam. (The White Pass & Yukon Railway, in Alaska, still uses a steam rotary plough to this day). In Canada, only two rotary snow ploughs of this type are still in existence – this is one of them. Snow has always been a major obstacle faced by railway companies. While wedge ploughs are usually adequate, conditions in the snowiest areas (the Rockies and the Gaspé) call for special equipment. In 1869, a patent for the Compound Revolving Snow Shovel, which twenty years later became the rotary steam snow plough, was taken out by Toronto dentist J.W. Elliot. His invention led to a first prototype in 1883-84 when the patent was taken over by the American Leslie brothers. Since they were associated with Orange Jull, the device was called the “Elliott-Jull Snow Plow”. Various versions were built until the early 1940s and were used by most North American railway companies and a few French ones. With its ability to move incredible amounts of snow and even smaller tree trunks (flung by avalanches onto the tracks), the “rotary” looked like a roaring beast spitting out its meal. The steam engine that powered its turbine did not provide traction – the plough was pushed by several locomotives. In 1925-26, Arthur Sicard invented the first snowblower by modifying the rotary snow plough’s turbine, giving it the form of an endless screw. All the information used with the pictures was taken from information at the Canadian Railway Museum Site. www.exporail.org/en/collections/our-collection/