The most photographed bridge in Rome... 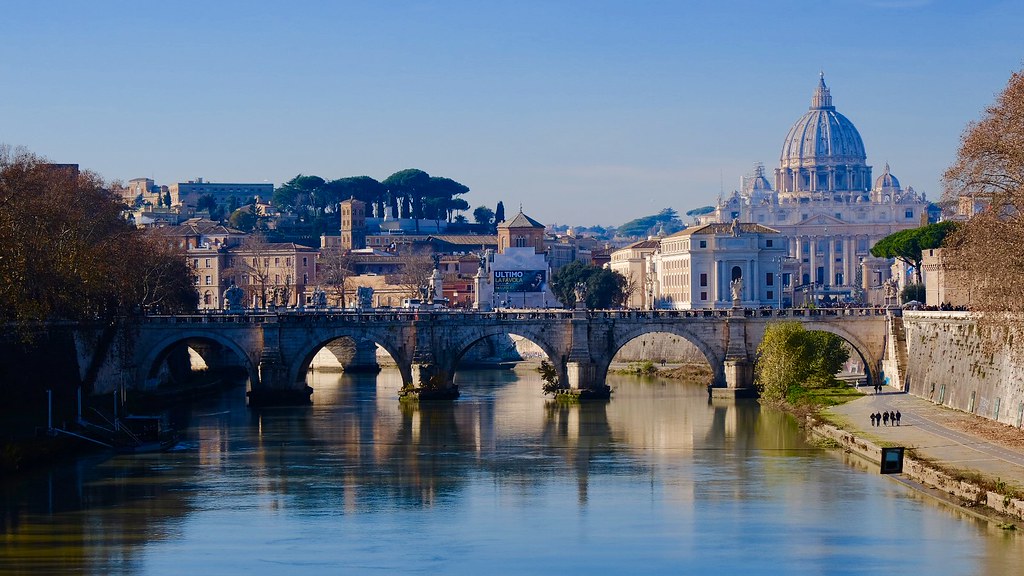 Author: joanne clifford
Description:
Ponte Sant’Angelo and the dome of St Peter’s Basilica, as seen from Ponte Umberto I - A bridge with a view. Ponte Sant'Angelo (Bridge of the Holy Angel). “Sant’Angelo Bridge, Italian Ponte Sant’Angelo, ancient (Latin) Pons Aelius, ancient Roman bridge, probably the finest surviving in Rome itself, built over the Tiber by the emperor Hadrian (reigned 117–138 AD) to connect the Campus Martius with his mausoleum (later renamed Castel Sant’Angelo). The bridge was completed about AD 135. It consists of seven stone arches and five main spans of about 60 feet (18 m) each, supported on piers 24 feet (7 m) high.” (1) In the 13th century Pope Clement IV installed an iron balustrade and in the 16th century Pope Clement VII placed statues of Saints Peter and Paul at the end of the bridge. In 1688, 10 statues of angels, designed by Gian Lorenzo Bernini, were mounted on the parapets.” (1) “The bridge's three central arches are still the originals from the ancient Roman era. In the seventeenth century two more arches were added, one on either side, to replace the original ramps that lead to the bridge. The bridge was further modified in the nineteenth century when the Tiber embankment was built to protect the city from floodwater. Today the bridge is pedestrianized; tourists pass here on their way to the Castel Sant'Angelo and the Vatican.”(2) Sources: (1) Encyclopedia Britannica. Available at www.britannica.com/topic/SantAngelo-Bridge (2) A view on cities. Available at www.aviewoncities.com/rome/pontesantangelo.htm