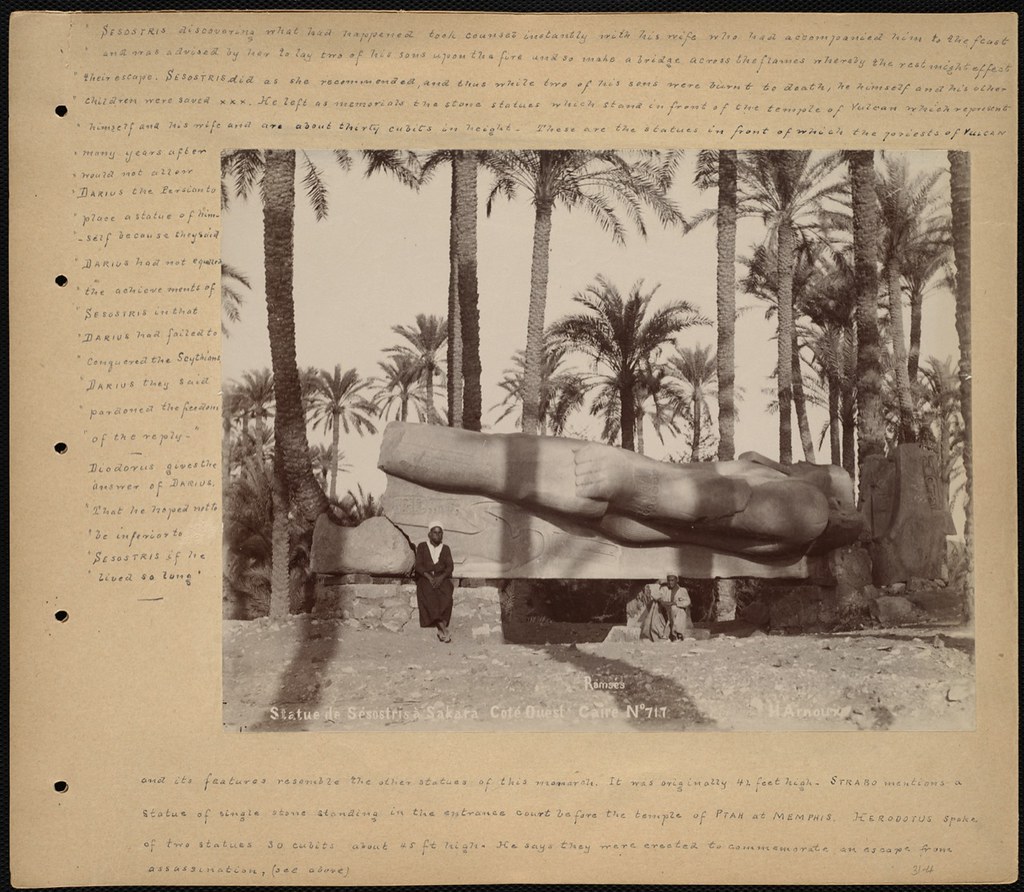 License: Creative Commons - Attribution
Author: Boston Public Library
Description:
BPLDC no.: 08_04_000185 Page Title: Statue of Ramses II Collection: William Vaughn Tupper Scrapbook Collection Album: On the Nile. Cairo to Luxor. Call no.: 4098B.104 v31 (p.4) Creator: Tupper, William Vaughn Photographer: Arnoux, Hippolyte Genre: Scrapbooks; Albumen prints Extent: 1 photographic print mounted on page : albumen ; page 33 x 39 cm. Description: Scrapbook page contains one photograph of a statue of Rameses II with two men sitting in front of it. Transcription: Sesostris discovering what had happpend took counsel instantly with his wife who had accompanied him to the feast and was advised by her to lay two of his sons upon the fire and so make a bridge across the flames whereby the rest might effect their escape. Sesostris did as she recommended, and thus while two of his sons were burnt to death, he himself and his other children were saved xxx. He left as memorials the stone statues which stand infront of the temple of Vulcan which represent himself and his wife and are about thirty cubits in height. These are the statues in front of which the priests of Vulcan many years after wound not allow Darius the Persian to place a statue of himself because they said Darius had not equalled the achievements of Sesostris in that Darius had failed to conquered the Seythians. Darius they said pardoned the freedom of the reply- Diodorus gives the answer of Darius, That he hoped not to be inferior to Sesostris if he lived so long. ...and its features resemble the other statues of this monarch. It was originally 42 feet high. Strabo mentions a statue of single stone standing in the entrance court before the temple of Ptah a Memphis. Herodotus spoke of two statues 30 cubits about 45 ft high. he says they were erected to commemorate an escape from assassination (see above) Notes: Page title and description supplied by cataloger, derived from captions and/or annotated information; Caption on image: Ramses, Statue de Sesostria a Sakara Cote Ouest Caire N 717 ; Transcription continued from previous page. BPL Department: Print Department Rights: No known restrictions.