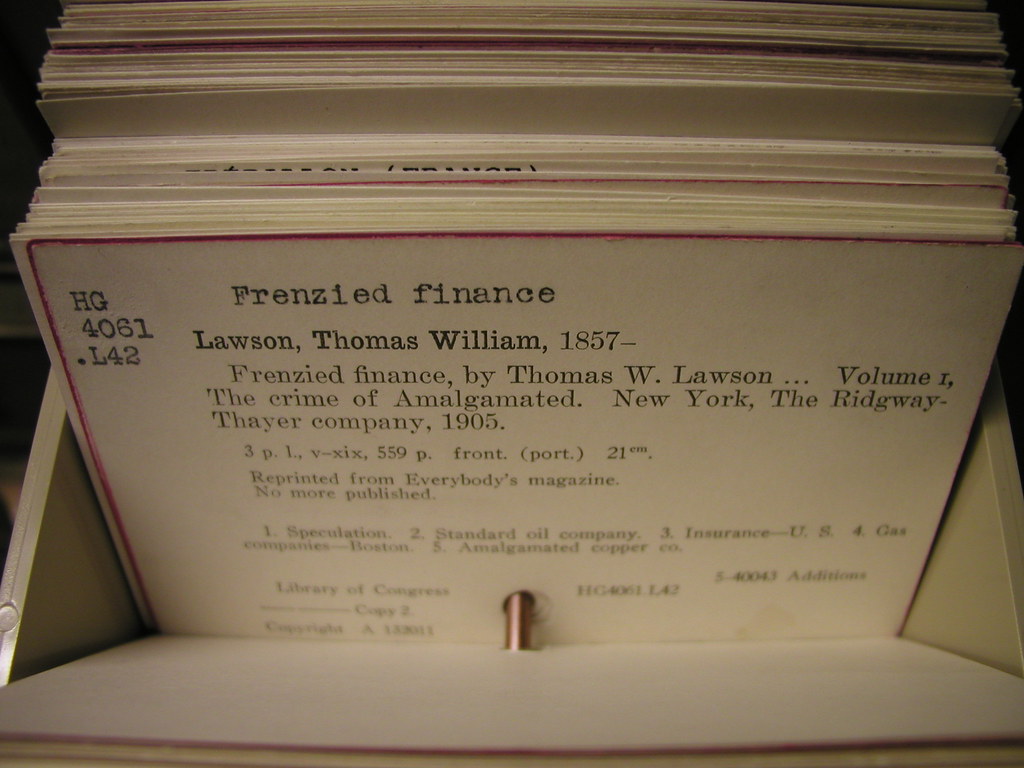 License: Creative Commons - Attribution
Author: David Fulmer
Description:
Administrators are singling out card catalogs, I think, not as a last resort but as a first resort, because they hate them. They feel cleaner, lighter, healthier, more polyunsaturated, when all that thick, butter-colored paper is gone. (One Berkeley administrator was heard saying, "Oh, we're just going to get rid of those junky old cards. Nobody uses the subject catalog anyway.") "Resist the impulse to burn those old cards," gaily cautions one article on retrospective conversions, since "the staff will experience withdrawal symptoms." The impulse to burn is there, it seems to me, because library administrators (more often male than female) want so keenly to distance themselves from the quasi-clerical associations that surround traditional librarianship-the filing, the typing, the shelving, the pasting, the labeling. Librarianship, they think (rightly), hasn't received the respect it deserves. The card catalog is to them a monument, not to intergenerational intellect, but to the idea of the lowly, meek-and-mild public librarian as she exists in the popular mind. The archetype, though they know it to be cheap and false, shames them; they believe that if they are disburdened of all that soiled cardboard, they will be able to define themselves as Brokers of Information and Off-Site Digital Retrievalists instead of as shy, bookish people with due-date stamps and wooden drawers to hold the nickel-and-dime overdue fines, with "Read to Your Child" posters over their heads and "February Is Black History Month" bookmarks at their fingertips. The proponents of computerization are such upbeat boosters of the library's potential role in the paperless society (Fred Kilgour once wrote that "not having to go to a library is a very important improvement in providing library service," and when asked in an end-of-career interview whether he felt there was any possible downside to library automation, he thought for a moment and replied, "I can't think of any negative effect") that library managers are encouraged to forget-are eventually frightened even to admit-that their principal job is to keep millions of used books dry and lend them out to people. When we redefine libraries as means rather than as places-as conduits of knowledge rather than as physical buildings filled with physical books-we may think that the new, more "visionary," more megatrendy definition embraces the old, but in fact it doesn't: the removal of the concrete word "books" from the library's statement of purpose is exactly the act that allows misguided administrators to work out their hostility toward printed history while the rest of us sleep. Baker, Nicholson. The Size of Thoughts: Essays And Other Lumber. New York: Random House, 1996. p.157-158