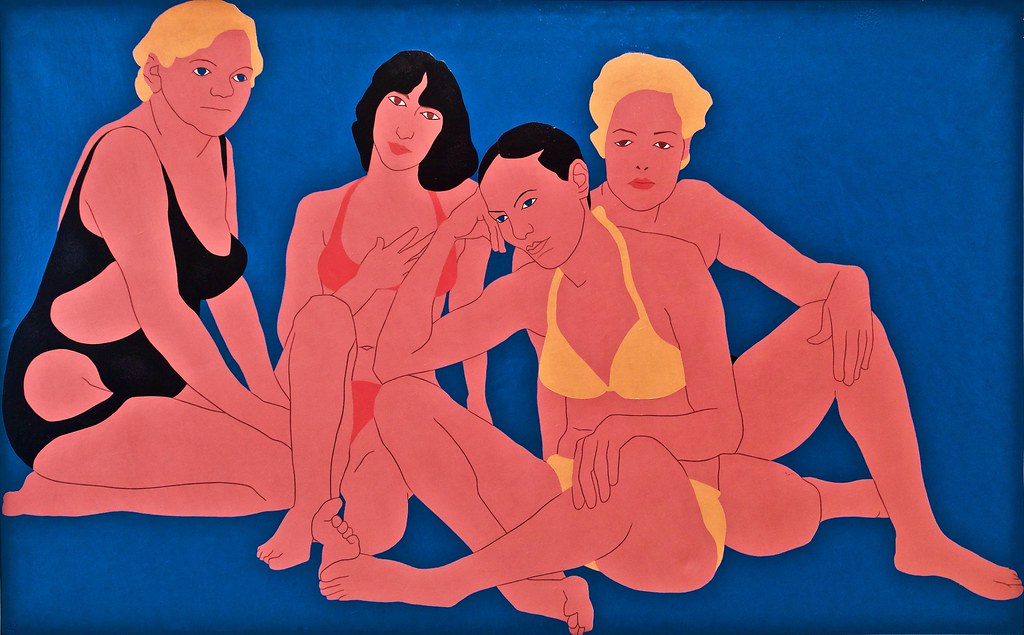 License: Creative Commons - Attribution
Author: Pedro Ribeiro Simões
Description:
Calouste Gulbenkian Museum, Modern Collection, Lisbon, Portugal Material: Oil on canvas Collection: Calouste Gulbenkian Museum - Modern Collection Inv.: 71P190 BIOGRAPHY A self-taught artist, born to a Greek father and Portuguese mother in Lisbon, Nikias Skapinakis began a course in architecture at the School of Fine Arts in Lisbon: a course he didn’t complete but which served to cement his decision to become an artist. He first showed his work in 1948 at the IIIª Exposição Geral de Artes Plásticas [3rd General Exhibition of Visual Arts], alongside figures such as Júlio Pomar, Fernando Lanhas and Nuno de Sampayo, among others. These General Exhibitions had been devised with the clear intention of breaking away from official Portuguese culture, or what remained of the activity of the SPN/SNI (the Secretariat for National Propaganda, renamed the Secretariat for National Information in 1945) following the Second World War. Nevertheless, the fundamentally independent nature of Skapinakis’ work was evident from the outset, both in his treatment of human forms and landscapes and in his already clear preference for the world of coloured forms, an affinity that was to remain with him. His first works were landscapes in which he used a contrasting palette to depict houses, their forms simplified to small cubes and grids (the legacy of an interest in post-cubism). The chromatic matrix established itself from the outset as the fundamental focus of the painter’s interest in an investigation of the visual image. During the 1950s, a growing freedom in the interpretation of colour based on the effects of light on landscapes and scenes with figures led Skapinakis to depart from his former cubist-inspired models and, inspired by the painting of the Renaissance, to emphasise the curved line in drawing and in containing forms, as well as a scenographic concept of painting envisaged as an imaginary surface for representing something other than observed or remembered reality. Skapinakis favoured images that were pared down, filtered by chromatic imagination and by a logic developed through synthesis. For the artist, then, painting is a product inscribed within a sensibility mediated by reason. As a result, across his work – consisting predominantly of painting, but also collage and drawing and at times illustration – expression rarely becomes informalism or a spontaneous manifestation (expressionist in the sense of art brut or action painting, for example); even when during series from the 1960s and 1980s onwards he developed a ‘pseudo-abstractionist’ concept of the image, which still takes figuration as a reference, such as Parafiguração [Parafiguration] (1966-1976; 1979-1987). Thus even when his images appear to consist of signs or arrangements of signs and colours that are apparently random, these are in fact generated by a rigorous process of composition which imposes its internal rules on the breaking up of forms, maintaining their more or less visible links to the figurative tradition. Nikias Skapinakis’s work is also notable for its independence from the major aesthetic debates of the periods during which it was produced – countering, for example, the emergence of a trend for abstraction by affirming the vitality of figurative representation, evident in the second half of the 1950s –, a constant concern with sources (literary, historical, graphic and iconographic) and by his comparative study of particular aspects of the history of western and middle or far eastern art (in the Paisagens do Vale dos Reis [Landscapes of the Valley of the Kings] series, 1987 -; and later in the Quartos Imaginários [Imaginary Rooms] series, 2001). In the 1960s he turned his study to the iconographic description of an intellectual and effeminate Lisbon urban bourgeoisie which he depicted on various occasions, in a celebrated series titled Para o Estudo da Melancolia em Portugal [Towards a Study of Melancholy in Portugal] (1967-1974), and, in recent years, showing a new focus of interest in the Tag series (2002-), an unexpected incursion into street art and graffiti. All these qualities always feedback into his work to a degree, the result of an extended meditation on the destiny of the visual image in European and western culture pursued more or less independently from – though not unaware of – prevailing trends, drawing its logic and continuity from its own development. In recent years, furthermore, the idea of things emerging from within the very process of making images has been steadily developed through his use of supports that are cylindrical and can be extended or stretched, such as backdrop paper, wrapping paper or toilet paper rolls – in a spatialisation of time. Nikias Skapinakis’s work has been the subject of various retrospective exhibitions (for example, Chiado Museum, 1996; Serralves Museum, 2000; Arpad Szenes Foundation, 2006), the most recent of which, in 2012, took place at the Berardo Collection Museum. Ana Filipa Candeias May 2013 SOURCE: gulbenkian.pt/museu/en/artist/nikias-skapinakis/