Bright Auroras Light Up the Sky and the Land 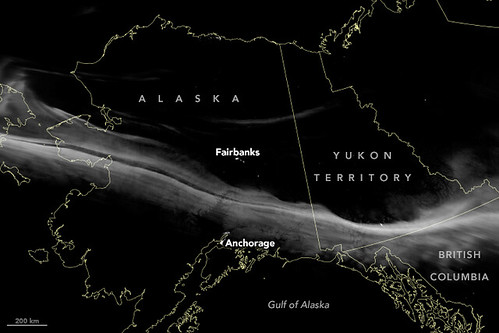 License: Creative Commons - Attribution
Author: NASA Goddard Space Flight Center
Description:
From sunset to sunrise, brilliant auroras — also known as the Northern Lights — provided a dazzling light show for Alaskans on November 5, 2018. Those dancing lights were also visible from space. This image shows the aurora over Alaska very early on November 5, 2018. The light was so bright that it illuminated the terrain below. The aurora likely appeared brighter that night because it occurred two days before a new Moon, meaning the sky was darker than at other times in the lunar cycle. This image was acquired by the Visible Infrared Imaging Radiometer Suite (VIIRS) on the Suomi NPP satellite. VIIRS has “day-night band” (observing mode) that detects city lights and other nighttime signals such as auroras, airglow and reflected moonlight. In these images, the sensor detected the visible light emissions that occurred when energetic particles rained down from Earth’s magnetosphere and into the gases of the upper atmosphere. These auroras come at a time known as solar minimum, a relatively calm period of activity on the Sun that occurs every 11 years or so. During this time, the Sun experiences fewer sunspots and solar flares—phenomena that can lead to auroras. NASA Earth Observatory images by Joshua Stevens, using VIIRS day-night band data from the Suomi National Polar-orbiting Partnership. Story by Kasha Patel. NASA image use policy. NASA Goddard Space Flight Center enables NASA’s mission through four scientific endeavors: Earth Science, Heliophysics, Solar System Exploration, and Astrophysics. Goddard plays a leading role in NASA’s accomplishments by contributing compelling scientific knowledge to advance the Agency’s mission. Follow us on Twitter Like us on Facebook Find us on Instagram