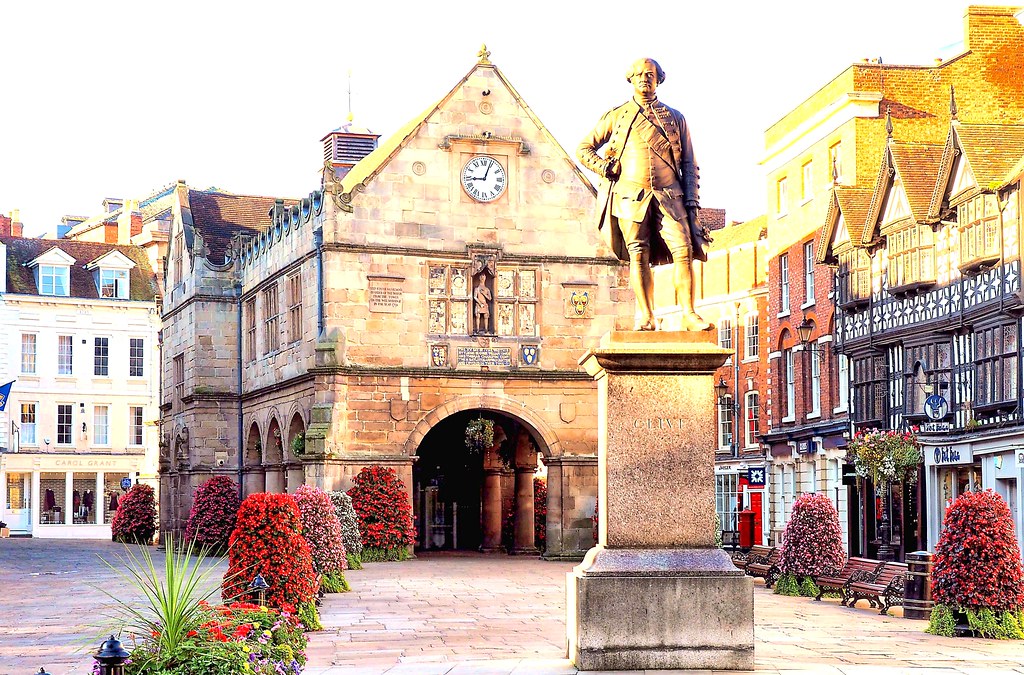 License: Creative Commons - Attribution-No Derivatives
Author: Jim Roberts Gallery
Description:
Built in 1596 the Old Market Hall, an example of late Tudor influence with primarily Elizabethan architecture, had two storeys: the large upper room was originally used by the Shrewsbury drapers or dealers in cloth to sell Welsh wool and the lower floor was used by farmers to sell their corn. The Old Market Hall was one of the earliest forms of prefabricated buildings; it was erected in less than four months. It bears the Royal Coat of Arms of Queen Elizabeth I, with the date of 1596, and the English lion and the Welsh dragon as supporters. A previous Market House which was built on the same site in the 1260's was demolished to make way for the Market Hall. The building is made from Grinshill stone (from the north of Shropshire) and was used by wool merchants as a place to sell their fleeces. The post holes where fleeces were hung can still be seen today. The top room of the old Market Hall was used as the town's magistrate’s court until 1995. The lower part of the structure has been used for many purposes, including as an air raid shelter during the Second World War. Above the main arch on the North side of the Old Market Hall there is a statue of a man in armour; he is thought to have been of Richard, Duke of York (died 1460), which would be the only one of him in the whole nation. This sculpture was originally located on the Welsh Bridge and it was moved to its current location on the orders of the town mayor in 1771. At the other end of the Square, where Clive’s statue now stands, would have been another market place that was called the Apple Market or Green Market and it was here the fruit and veg were sold. Sadly, the Old Plough pub has long gone and also the old Shirehall has been replaced by Princess House but the Square still retains a character all of it`s own. All my photos and images are copyrighted to me although you are welcome to use them for non commercial purposes as long as you give credit to myself. Thank you for looking at my photographs and for any comments it is much appreciated. www.jimroberts.co.uk www.flickriver.com/photos/jimborobbo/popular-interesting/