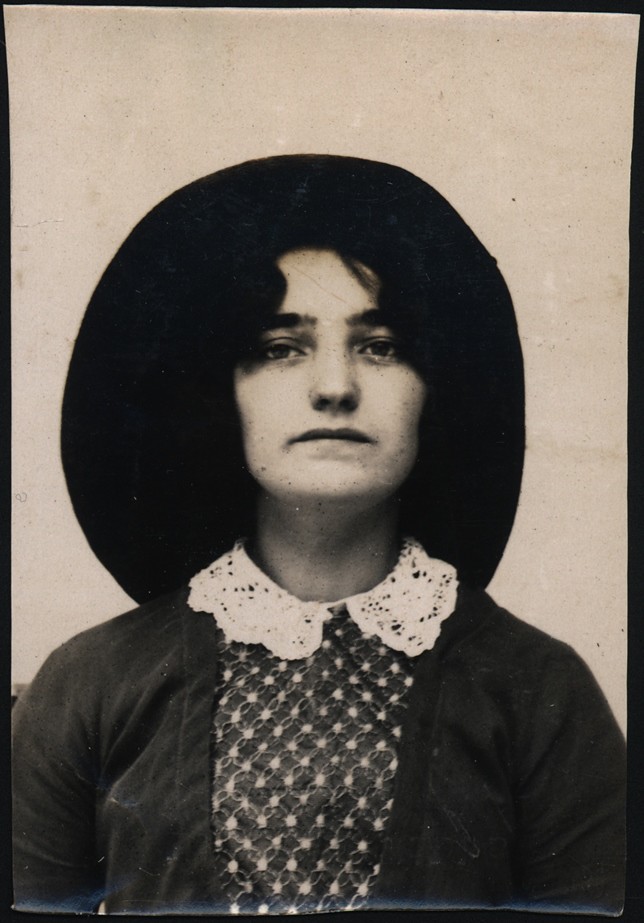 License: No Copyright
Author: Tyne & Wear Archives & Museums
Description:
Name: Lillian Tibbs Arrested for: not given Arrested at: North Shields Police Station Arrested on: 12 September 1914 Tyne and Wear Archives ref: DX1388-1-250-Lillian Tibbs The Shields Daily News for 14 September 1914 reports: “PETTY LARCENY. BLYTH WOMAN IN TROUBLE AT NORTH SHIELDS. Today at North Shields, Lillian Tibbs (21), Blyth, was charged with stealing a blue voile dress, value £1, the property of Mrs A.G. Colledge, 19 Rippon Terrace, between the 1st and 2nd inst. The prosecutrix stated that eight weeks ago the prisoner engaged a combined room at her house, representing herself as a married woman. Witness afterwards found that she was not married and had given the wrong name and she ordered her to leave. On the day after she had gone witness missed the dress. Det. Mason said he received the accused into custody at Blyth where she had been apprehended on the information of the Shields police. She was wearing the dress when arrested. Accused admitted taking the dress but said she thought there was no harm in doing so; she had given Mrs Colledge half a dozen aprons and an overcoat. Mrs Colledge said that the accused supposed husband got the overcoat but the aprons were still there. Accused’s mother said that her daughter had been in a situation at Monkseaton and she (the mother) was not aware of the kind of life she had been leaving. She would promise to look after the girl if the magistrates would be lenient with her. She had given no trouble previously. It was stated that the accused had said she had gone to live with the man in question out of spite against his wife. The man had now gone away to the Front. Accused promised to amend her life and was bound over in the sum of £5 to be of good behaviour for six months". These images are taken from an album of photographs of prisoners brought before the North Shields Police Court between 1902 and 1916 (TWAM ref. DX1388/1). This set is our selection of the best mugshots taken during the First World War. They have been chosen because of the sharpness and general quality of the images. The album doesn’t record the details of each prisoner’s crimes, just their names and dates of arrest. In order to discover the stories behind the mugshots, staff from Tyne & Wear Archives & Museums visited North Shields Local Studies Library where they carefully searched through microfilm copies of the ‘Shields Daily News’ looking for newspaper reports of the court cases. The newspaper reports have been transcribed and added below each mugshot. Combining these two separate records gives us a fascinating insight into life on the Home Front during the First World War. These images document the lives of people of different ages and backgrounds, both civilians and soldiers. Our purpose here is not to judge them but simply to reflect the realities of their time. (Copyright) We're happy for you to share this digital image within the spirit of The Commons. Please cite 'Tyne & Wear Archives & Museums' when reusing. Certain restrictions on high quality reproductions and commercial use of the original physical version apply though; if you're unsure please email archives@twmuseums.org.uk.