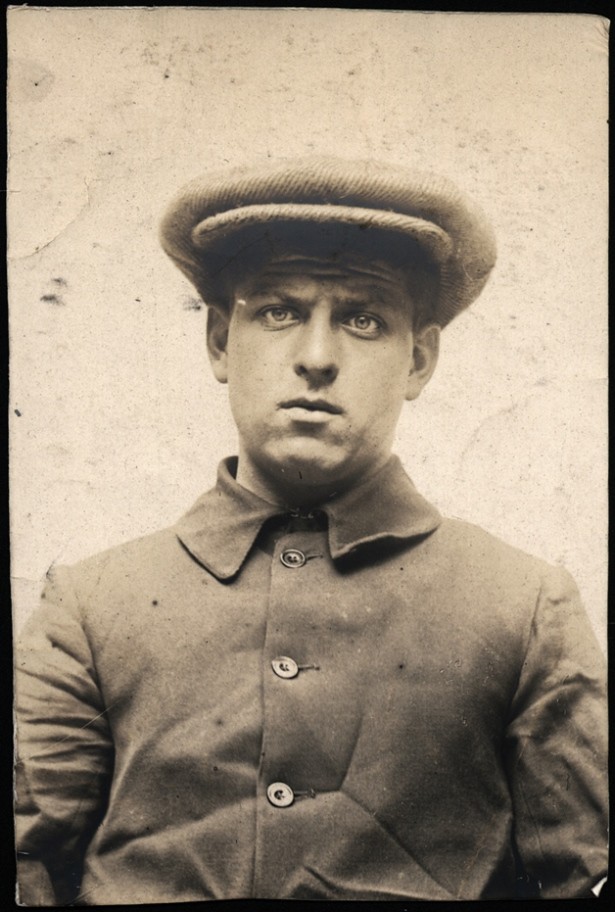 License: No Copyright
Author: Tyne & Wear Archives & Museums
Description:
Name: John T. Ingleson Arrested for: not given Arrested at: North Shields Police Station Arrested on: 30 March 1915 Tyne and Wear Archives ref: DX1388-1-260-John T Ingleson The Shields Daily News for 7 April 1915 reports: “BREAKING AND ENTERING. SOLDIERS COMMITTED FOR TRIAL AT NORTH SHIELDS. Frederick Jones (19) and John Thomas Ingleson (19), soldiers, stationed at Earsdon, were brought up on remand at North Shields today charged with breaking and entering on the 30th March a dwelling house, situated at 9 Lovaine Terrace and stealing 16 knives, a cruet, clock, pair of scissors, case of needles, silver tray and two salt cellars valued at £3 7s 6d the property of the executors of the late Thomas Williamson. They were also charged with breaking and entering between 10pm on the 29th ult. and 7.45am on the 30th ult. a confectioner’s shop in Queen Alexandra Road and stealing two loaves of bread, valued at 7d, the property of Messrs Patterson and Reed. George Anderson, a cashier, identified the goods as the property of the executors of the late Mr Williamson. PC John Dixon stated that at 2.50am on the 30th ult. he found a window broken at 9 Lovaine Terrace. He lifted the sash and upon shining his lamp around the room he saw Jones behind a bookcase and the other man crouching in a corner. Witness arrested defendants and on searching them at the police station found the goods mentioned in their possession… Det.-Insp. said that on the morning of the 30th, from what Jones told him, he examined Messrs Patterson and Reed’s shop and found a large stone, which exactly fitted the break in the window. Afterwards witness jointly charged both men and Jones replied, “We did it” and Ingleson said, “I say the same”. When formally charged with the first offence Jones said, “We took them” and Ingleson said, “We wanted to get in there mostly to get some clothes”. Replying to the second charge, defendants both said they wanted something to eat. They were committed for trial at the Quarter Sessions and the magistrates complimented PC Dixon upon his smart capture. On the recommendation of Chief Constable Huish, the Watch Committee have granted the merit badge to PC Dixon.” The Shields Daily News for 9 April 1915 reports: “SHOP BREAKING BY SOLDIERS AT NORTH SHIELDS Frederick Jones, 19, and John Thomas Ingleson, 19, privates in the Duke of Wellington’s First Riding Regiment, stationed at Earsdon, were charged with having broken into the unoccupied house of the late Mr Thomas Williamson, Lovaine House, Lovaine Terrace, North Shields on March 30 and with having stolen various goods, valued at £3 7s 6d. They were also charged with the theft of two loaves of bread from the confectionery shop of Messrs Patterson and Reed at North Shields on the same date. Accused pleaded guilty. An officer from the prisoners’ regiment said they were indifferent soldiers, because they had repeatedly absented themselves without leave. The officer knew nothing about the men’s records and said that was a matter that was not very carefully gone into at this time. The Chairman said he observed from the depositions taken at the police court that Jones said, “We wanted money and clothes. I have soldiered for six months for a shilling. I got 90 days pay stopped.” The officer said it was true that Jones had lost a great deal of his pay but that was for absenting himself from his regiment. The balance of the account was on the other side. Jones, who was convicted of wilful damage at Dublin in May last, was sentenced to six months’ imprisonment with hard labour on each charge, to run concurrently. Ingleson was sentenced to four months imprisonment with hard labour”. These images are taken from an album of photographs of prisoners brought before the North Shields Police Court between 1902 and 1916 (TWAM ref. DX1388/1). This set is our selection of the best mugshots taken during the First World War. They have been chosen because of the sharpness and general quality of the images. The album doesn’t record the details of each prisoner’s crimes, just their names and dates of arrest. In order to discover the stories behind the mugshots, staff from Tyne & Wear Archives & Museums visited North Shields Local Studies Library where they carefully searched through microfilm copies of the ‘Shields Daily News’ looking for newspaper reports of the court cases. The newspaper reports have been transcribed and added below each mugshot. Combining these two separate records gives us a fascinating insight into life on the Home Front during the First World War. These images document the lives of people of different ages and backgrounds, both civilians and soldiers. Our purpose here is not to judge them but simply to reflect the realities of their time. (Copyright) We're happy for you to share this digital image within the spirit of The Commons. Please cite 'Tyne & Wear Archives & Museums' when reusing. Certain restrictions on high quality reproductions and commercial use of the original physical version apply though; if you're unsure please email archives@twmuseums.org.uk.