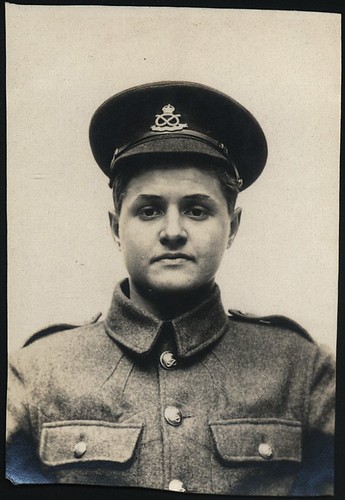 License: No Copyright
Author: Tyne & Wear Archives & Museums
Description:
Name: George Walker Arrested for: not given Arrested at: North Shields Police Station Arrested on: 15 March 1916 Tyne and Wear Archives ref: DX1388-1-264-George Walker The Shields Daily News for 20 March 1916 reports: “FORGING CHEQUES. YOUNG SOLDIERS CHARGED AT NORTH SHIELDS. At North Shields today … Harold Weston Cummings (17), a soldier, of 33 Hanover Gardens, Kensington Oval, London, SE, was brought up on remand, charged with having feloniously forged a bank cheque for the sum of £4 15s on or about Feb. 25th. Geo. Ernest Walker (17), a soldier of Freer Street, Walsall, was charged with cashing the cheque on the 25th Feb. They were further charged with similar offences on the 25th Feb. Mr F. Lambert defended both defendants. James Hamilton Johns, Second Lieutenant in the South Staffordshire Regiment, said Cummings was attached to the same regiment at Earsdon. The cheque produced signed ‘J.H. Johns’ was not out of his book and it was not his signature. Witness never asked the defendants to sign cheques on his behalf. Walker was also billeted at Earsdon. James N. Wilson, cashier at Lloyd’s Bank, Howard Street, North Shields, said that between 10 and 12.30 on the 25th Feb. Walker came to the bank and asked to cash the cheque produced. Witness asked where he came from and he said Shiremoor and he cashed it. The cheque was sent in the usual way and it was returned as the signature had been forged. The cheque was from a quartermaster’s book, which had been lost or stolen at Plymouth. Detective-Sergeant Hall said that on the 11th inst. he went to Earsdon and arrested Cummings and when cautioned he replied “I have nothing to say”. On the way to North Shields he said: “I did not attempt to alter the handwriting in any way. I have had the cheque book about a year and have never attempted to use it”. Later, witness saw Walker in the custody of the Newcastle police and when cautioned, he replied “I have nothing to say”. Mr Lambert stated that the other charge was of a precisely similar character and he did not think it necessary to go into it. There could not be any doubt that the charges were serious ones but he suggested that, having regard to all the circumstances, it could be settled to the satisfaction of the police and the bankers. The defendants were both 17 years of age, and young as they were they had already served in the army for four years. Walker’s father had been 26 years in the army and was now in France. The police might be prepared to allow the more serious charge to be reduced to one of false pretences and the money would be refunded by the officers of the regiment. Chief Constable said the defendants had cashed three more cheques at Whitley and attempted to cash one at Newcastle. The people on these cases had refused to prosecute. Capt. Anderson gave the defendants good characters. Chief Constable Huish said he had no objection to the cases being reduced. The second case was not proceeded with and Cummings was charged with having received the money by false pretences and Walker with aiding and abetting. Both men pleaded guilty. The Chairman said the defendants would be bound over for twelve months and they were greatly indebted to their solicitor and officers." These images are taken from an album of photographs of prisoners brought before the North Shields Police Court between 1902 and 1916 (TWAM ref. DX1388/1). This set is our selection of the best mugshots taken during the First World War. They have been chosen because of the sharpness and general quality of the images. The album doesn’t record the details of each prisoner’s crimes, just their names and dates of arrest. In order to discover the stories behind the mugshots, staff from Tyne & Wear Archives & Museums visited North Shields Local Studies Library where they carefully searched through microfilm copies of the ‘Shields Daily News’ looking for newspaper reports of the court cases. The newspaper reports have been transcribed and added below each mugshot. Combining these two separate records gives us a fascinating insight into life on the Home Front during the First World War. These images document the lives of people of different ages and backgrounds, both civilians and soldiers. Our purpose here is not to judge them but simply to reflect the realities of their time. (Copyright) We're happy for you to share this digital image within the spirit of The Commons. Please cite 'Tyne & Wear Archives & Museums' when reusing. Certain restrictions on high quality reproductions and commercial use of the original physical version apply though; if you're unsure please email archives@twmuseums.org.uk.