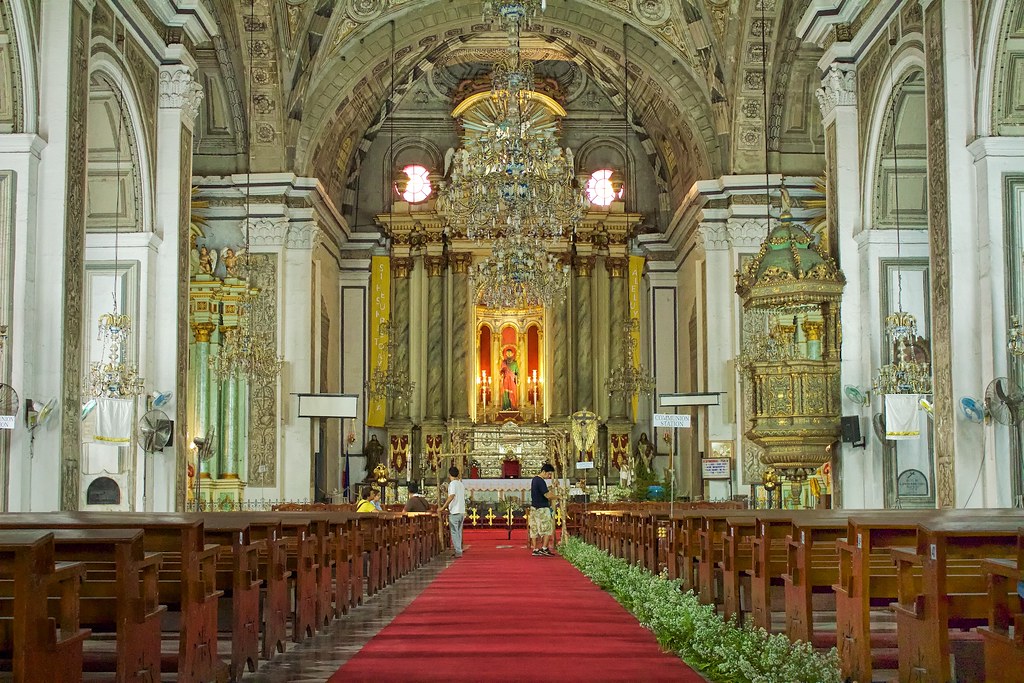 License: Creative Commons - Attribution
Author: Ray in Manila
Description:
PUBLISHED designsmanila.com/manila-tranding-news/heres-how-priests-... www.unchartedphilippines.com/en/community/travel-stories/... elviajerofeliz.com/manila-una-ciudad-emocionante/ www.thebrokebackpacker.com/best-places-to-visit-in-manila/ --------------------- San Agustin Church originally known as "inglesia de San Pablo", founded in 1571 is the oldest stone church (built in 1589) in the Philippines. It is a Roman Catholic church under the auspices of The Order of St. Augustine, located inside the historic walled city of Intramuros in Manila. In 1993, San Agustin Church was one of four Philippine churches constructed during the Spanish colonial period to be designated as a World Heritage Site by UNESCO, under the collective title Baroque Churches of the Philippines. It was named a National Historical Landmark by the Philippine government in 1976. The present structure is the third Augustinian church erected on the site. The first San Agustin Church was the first religious structure constructed by the Spaniards on the island of Luzon. Made of bamboo and nipa, it was completed in 1571, but destroyed by fire in December, 1574 during the attempted invasion of Manila by the forces of Limahong. A second church made of wood was constructed on the site. This was destroyed in February 1583, in a fire that started when a candle set ablaze the drapes of the funeral bier during the interment of the Spanish Governor-General Gonzalo Ronquillo de Peñalosa. The Augustinians decided to rebuild the church using stone, and to construct an adjacent monastery. Construction began in 1586. The structure was built using hewn adobe stones quarried from Meycauayan, Binangonan and San Mateo, Rizal. The work proceeded slowly due to the lack of funds and materials, as well as the relative scarcity of stone artisans. The monastery was operational by 1604, and the church was formally declared complete on January 19, 1607, and named St. Paul of Manila. San Agustin Church was looted by the British forces which occupied Manila in 1762 during the Seven Years' War. In 1854, the church was renovated and Nnne years later, on June 3, 1863, the strongest earthquake at that time, hit Manila leaving widespread destruction to the city with San Agustin Church, the only public building left undamaged in the city. A series of strong earthquakes struck Manila again on 18–20 July 1880. This time, the tremors left a huge crack on the left bell tower of the church. The crack was eventually repaired, but the left tower was permanently removed as it appears today. The church withstood the other major earthquakes that struck Manila before in 1645, 1699, 1754, 1796, 1825 and 1852. On August 18, 1898, the church was the site where Spanish Governor-General Fermin Jaudenes prepared the terms for the surrender of Manila to the United States of America following the Spanish–American War. During the Japanese occupation of the Philippines during World War II, San Agustin Church was turned into a concentration camp for prisoners. In the final days of the Battle of Manila, hundreds of Intramuros residents and clergy were held hostage in the church by Japanese soldiers; many of the hostages would be killed during the three-week-long battle. The church itself survived the flattening of Intramuros by combined American and Filipino ground forces in May, 1945 with only its roof damaged, the only one of the seven churches in the walled city to remain standing. The church was renovated in 2013, replacing its colorful facade with a mature stone-colored one. en.wikipedia.org/wiki/San_Agustin_Church_(Manila)#cite_note-lay4-2 PUBLISHED Unchartered Philiipines, A Travel Adventure Company www.unchartedphilippines.com/en/community/travel-stories/... Elviajerofelix (blog) elviajerofeliz.com/manila-una-ciudad-emocionante/