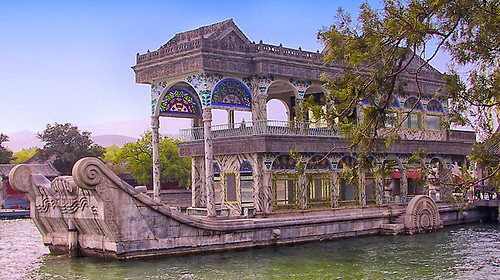 License: Creative Commons - Attribution
Author: Ray in Manila
Description:
The Marble Boat (Chinese: 石舫; pinyin: Shí Fǎng), also known as the Boat of Purity and Ease (Qing Yan Fǎng) is a lakeside pavilion on the grounds of the Summer Palace in Beijing, China. It was first erected in 1755 during the reign of the Qianlong Emperor] The original pavilion was made from a base of large stone blocks which supported a wooden superstructure done in a traditional Chinese design. In 1860, during the Second Opium War, the pavilion was destroyed by Anglo-French forces. It was restored in 1893 on order of the Empress Dowager Cixi. In this restoration, a new two-story superstructure was designed which incorporated elements of European architecture. Like its predecessor, the new superstructure is made out of wood but it was painted to imitate marble. On each "deck", there is a large mirror to reflect the waters of the lake and give an impression of total immersion in the aquatic environment. Imitation paddlewheels on each side of the pavilion makes it look like a paddle steamer. The pavilion has a sophisticated drainage system which channels rain water through four hollow pillars. The water is finally released into the lake through the mouths of four dragonheads. The boat design of the pavilion may relate to a quote attributed to Wei Zheng, a chancellor of the Tang Dynasty renowned for his honest advice. He is said to have told the emperor "the waters that float the boat can also swallow it", implying that the people can support the emperor but can also topple him. With this in mind, Emperor Qianlong might have chosen to construct the Marble Boat on a solid stone base to indicate that the Qing Dynasty was not to be overthrown. The Marble Boat is often seen as an ironic commentary on the fact that the money used to restore the Summer Palace largely came from funds originally earmarked for building up a new imperial navy. The controller of the Admiralty, Prince Chun, owed much of his social standing as well as his appointment to the Empress Dowager, who had adopted his oldest son to become the Guangxu Emperor. Because of this, he probably saw no other choice than to condone the embezzlement. The pavilion is 36 meters long. It stands on the northwestern shore of Kunming Lake, near the western end of the Long Corridor. en.wikipedia.org/wiki/Marble_Boat