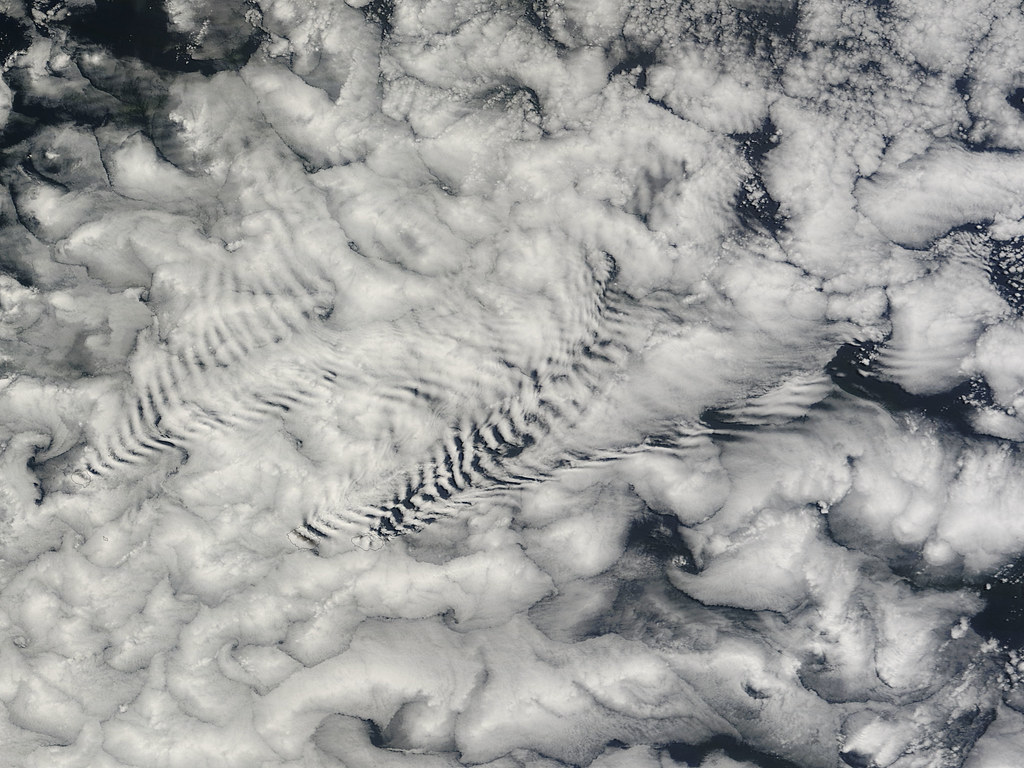 License: Creative Commons - Attribution
Author: NASA Goddard Space Flight Center
Description:
There are special places on Earth that sometimes write their personal signature in the clouds. The Crozet Islands are one such place, thanks to the tall volcanic peaks that grace the islands. When air flows around these tall peaks, it gets pushed around the islands as well as up and over the peak. The net effect of the flowing air flowing around the solid, tall peaks is much like the solid bow of a ship cutting through standing water. In each case v-shaped waves are formed behind the motion. In liquid, this is called a wake; in the atmosphere, when clouds are present or created, they are known as ship-wave-shaped clouds. The Moderate Resolution Imaging Spectroradiometer (MODIS) aboard NASA’s Terra satellite captured this true-color image as it passed over the Crozet Islands on November 26, 2014. Three distinct waves are seen behind the three largest islands. From west to east these are Pig Island, Possession Island and East Island. Credit: NASA/GSFC/Jeff Schmaltz/MODIS Land Rapid Response Team NASA image use policy. NASA Goddard Space Flight Center enables NASA’s mission through four scientific endeavors: Earth Science, Heliophysics, Solar System Exploration, and Astrophysics. Goddard plays a leading role in NASA’s accomplishments by contributing compelling scientific knowledge to advance the Agency’s mission. Follow us on Twitter Like us on Facebook Find us on Instagram