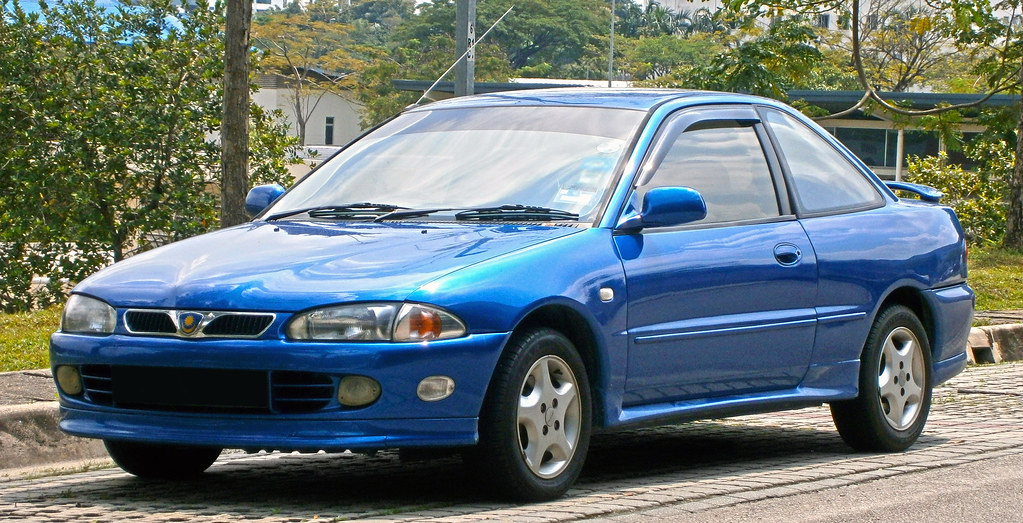 License: Creative Commons - Attribution-Share Alike
Author: Manoj Prasad
Description:
Photographed in Cyberjaya, Malaysia Assembly : Shah Alam, Selangor, Malaysia Notes : Rear muffler is non-standard. Missing some badges at the back and on the front fenders. The Proton Putra is a very special Proton; it's the only 2-door / coupé from the company, and it will likely hold on to that title for the foreseeable future. In a country where practicality often matters more than style, Proton sure did surprise many when they unveiled the rather good-looking Putra a couple of years after the launch of the Wira, not forgetting the 3-door Satria hatch as well. At the time, the Putra was the sportiest Proton in the fleet, at least until the Satria GTi came along much later in 1998. The Putra is pretty much indistinguishable from a high-specced Wira or Satria from the front, but from the side, it's immediately obvious that it's something else... but it's the rear end of the Putra which really stands out. The sleek lines and flowing curves made a huge statement back in the mid-1990s, it was without a doubt the best looking and most attractive Proton yet. Nonetheless, the Putra is and was for the most part... understated, unassuming and elegant. It didn't scream '' Hey, look at me, I'm a big bad sports car ! '' unlike its cousin, the Satria GTi. And it's not like the Putra didn't have the muscle either, the sole 1.8-litre Mitsubishi 4G93 DOHC 16-valve 4-cylinder had 138 bhp and 164 Nm of torque at its disposal, and it did the 0 to 100 km/h run in 9 seconds... not bad for mid-90s Proton eh ? Proton produced the Putra between 1995 and 2000, which is unjustified when compared to the Wira's long 1993 to 2007 lifespan. However, Proton resurrected the Putra in 2004/05 with a limited edition run, supposedly to clear out the remaining factory stock. Proton sold the Putra as the Proton M21 in Australia, the Proton Coupe in the United Kingdom, as well as the Proton 418 LRS in Germany and several other European countries. Putras exported to Europe and Australia were fitted with twin foglights on the rear license plate bracket. You'd be hard pressed to find a stock, unmodified and well-maintained Putra in Malaysia. Almost every Putra here has been modified to some extent, and the example above is no exception. Fortunately, the owner seems to have swapped out the rear muffler, and perhaps given his/her car a new coat of paint. Several badges are missing as well, but otherwise, she's as good as new ! I LIKE : Looks awesome. Dat ass. Cornering lights. Rarity & exclusivity. Pretty good power-to-weight ratio. Later versions were tuned by Lotus, and handled very well. Early units were bulletproof ( very reliable ). I DISLIKE : Exported units were better specified and built. Later units were less reliable. Ricers... ricers everywhere !