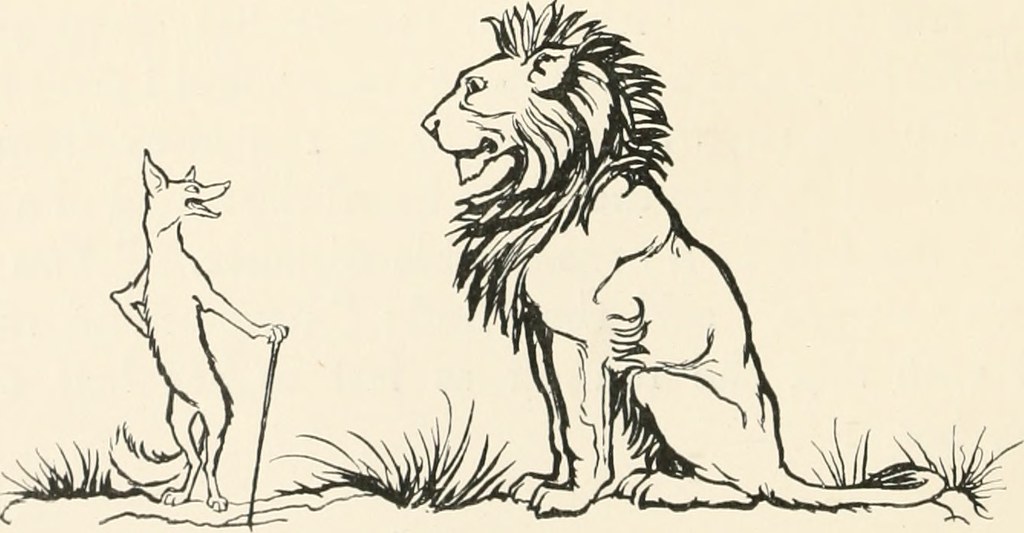 License: No Copyright
Author: Internet Archive Book Images
Description:
Identifier: aesopsfables00aeso Title: Aesop's fables Year: 1912 (1910s) Authors: Aesop Vernon Jones, V. S. (Vernon Stanley) Rackham, Arthur, 1867-1939, ill Subjects: Fables Publisher: London : Heinemann New York : Doubleday, Page Contributing Library: New York Public Library Digitizing Sponsor: MSN View Book Page: Book Viewer About This Book: Catalog Entry View All Images: All Images From Book Click here to view book online to see this illustration in context in a browseable online version of this book. Text Appearing Before Image: THE FOX AND THE LION A FOX who had never seen a Lion one day met one,^^^ and was so terrified at the sight of him that hewas ready to die with fear. After a time he met himagain, and was still rather frightened, but not nearly somuch as he had been when he met him first. Butwhen he saw him for the third time he was so far frombeing afraid that he went up to him and began to talkto him as if he had known him all his life. 72 Text Appearing After Image: THE EAGLE AND HIS CAPTOR A MAN once caught an Eagle, and after clipping his■^ *- wings turned him loose among the fowls in hishen-house, where he moped in a corner, looking verydejected and forlorn. After a while his Captor wasglad enough to sell him to a neighbour, who took himhome and let his wings grow again. As soon as hehad recovered the use of them, the Eagle flew out andcaught a hare, which he brought home and presentedto his benefactor. A fox observed this, and said tothe Eagle, Dont waste your gifts on him! Go andgive them to the man who first caught you; makehim your friend, and then perhaps he wont catch youand clip your wings a second time. THE BLACKSMITH AND HIS DOG A BLACKSMITH had a little Dog, which used tosleep when his master was at work, but wasvery wide awake indeed when it was time for meals.One day his master pretended to be disgusted at this,and when he had thrown him a bone as usual, hesaid, What on earth is the good of a lazy cur likeyou ? When I am hammerin Note About Images Please note that these images are extracted from scanned page images that may have been digitally enhanced for readability - coloration and appearance of these illustrations may not perfectly resemble the original work.