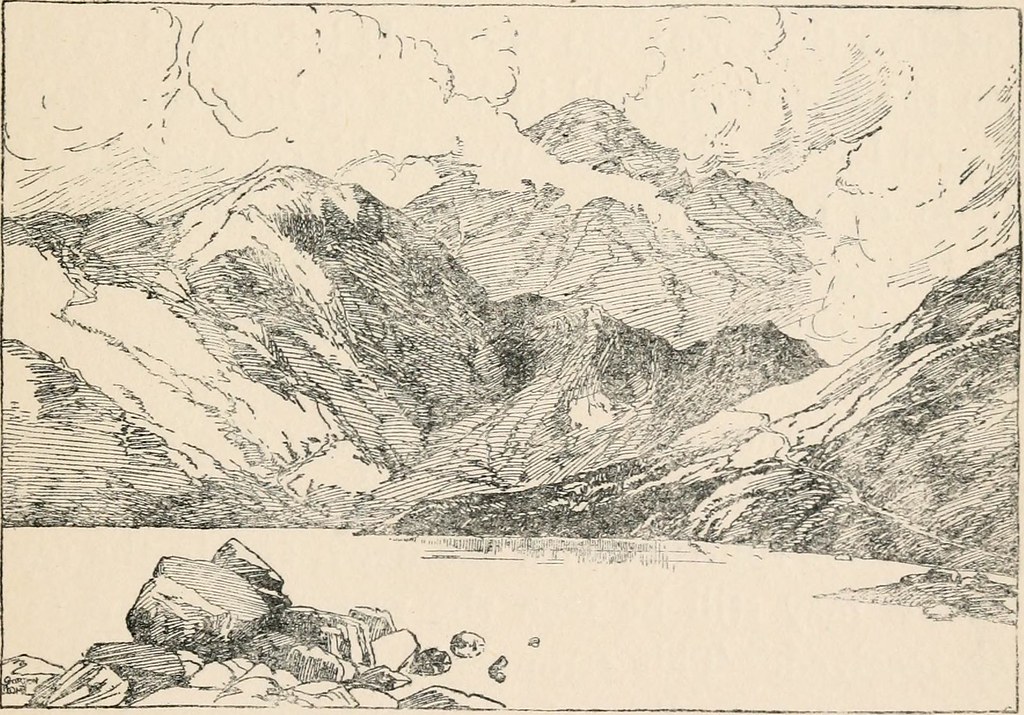 License: No Copyright
Author: Internet Archive Book Images
Description:
Identifier: londonnorthweste00eyre Title: The London & North-Western Railway Year: 1911 (1910s) Authors: Eyre-Todd, George, 1862-1937 Subjects: London and North-Western Railway Railroads -- Great Britain Great Britain -- Description and travel Publisher: London : A. and C. Black Contributing Library: New York Public Library Digitizing Sponsor: MSN View Book Page: Book Viewer About This Book: Catalog Entry View All Images: All Images From Book Click here to view book online to see this illustration in context in a browseable online version of this book. Text Appearing Before Image: he loser, filled with chagrin andjealousy, enlisted a witchs help, and a demon steedwas provided. On the way to church this steed bolted,pursued by the bridegroom. He came up with it onthe heights of Penmaenmawr, and just as he laid holdof his bride both horses and their riders plungedheadlong over the cliff. Overlooking the Lake of Llanberis on the westernslopes of Snowdon, Dolbadarn guarded one of the fivegreat passes which led into the heart of Wild Wales.It is the Welsh Chillon, for within its walls for twenty-three years, from 1254 to I277> Llewellyn, the lastPrince of Wales, imprisoned his brother Owen Goch 32 The Castles of Old Wales (Owen the Red) for taking part in rebellion againsthim. The fate of the captive was the subject of apoem by a Welsh Byron of his own time: From yonder heights a captives sighsAre wafted towards me by the gale ;There chained, abandoned, Owen lies, And I still live to tell the tale-To tell how, by a brothers doom,Yon towers are Owens living tomb ! Text Appearing After Image: Snowdon from Llyn Llydaw. David, another brother of Llewellyn — he whoinstigated the prince to the fatal rising againstEdward I. on the strength of a prophecy of Merlin—held the stronghold, after Llewellyns death, againstthe Earl of Pembroke, but was forced to escape fromit and hide with his wife and children among the wild L. & N.W. 33 5 London and North-Western Railway marshes and glens about Snowdon, till captured atlast and carried off to his cruel execution. On the eastern side of Snowdon again, on the linesouth of Bettws-y-Coed, the upper end of the Vale ofConway is dominated by the ruin of DolwyddelenCastle. This is said to have been built about theyear 500 by a Welsh prince whose name has been for-gotten, and it is alluded to by Southey in his Madoc.2But its chief memory is the fact that within its wallsLlewellyn the Great was born. It is believed to havebeen the last stronghold in Wales to hold out againstEdward I. The king had pushed his conquest and hispursuit of Da Note About Images Please note that these images are extracted from scanned page images that may have been digitally enhanced for readability - coloration and appearance of these illustrations may not perfectly resemble the original work.