Image from page 251 of "Hunting and fishing in Florida, including a key to the water birds known to occur in the state" (1896) 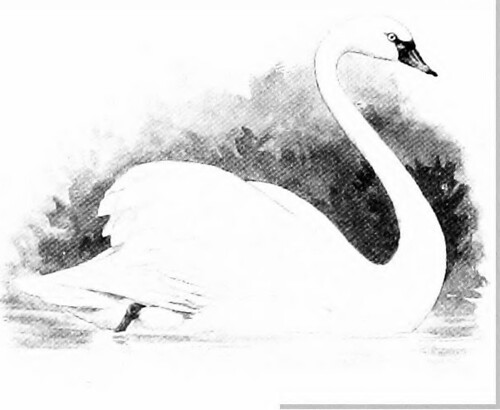 License: No Copyright
Author: Internet Archive Book Images
Description:
Identifier: cu31924003426024 Title: Hunting and fishing in Florida, including a key to the water birds known to occur in the state Year: 1896 (1890s) Authors: Cory, Charles B. (Charles Barney), 1857-1921 Subjects: Fishing Game and game-birds Seminole Indians Birds Publisher: Boston, Estes & Lauriat Contributing Library: Cornell University Library Digitizing Sponsor: MSN View Book Page: Book Viewer About This Book: Catalog Entry View All Images: All Images From Book Click here to view book online to see this illustration in context in a browseable online version of this book. Text Appearing Before Image: ard to Georgia and occa-sionalh to Florida, several having beenkilled on the Florida coast. The eggs are described as creamywhite in color, four in number. Thenest is composed of grass and moss. Subfamily CYGNIN.^. Swans. Genus OLOR Wagler. OLOR COLUMBIANUS {Ord).Whistling Swan. General plumage white ; bill and feet black ; asmall yellow spot at the base of the bill in frontof the eye which is not always present; the distancefrom the front angle of the eye to the back edge ofthe nostril is more than the distance from the backedge of the nostril to the end of the bill; this is oneof the characters by which it may be distinguishedfrom the Trumpeter Swan. The immature birds are usually ashy gray incolor with a brownish wash on the head and upperneck; feet pale yellowish, sometimes pale flesh color. Length, 53; Wing, 21.50; Bill, 4; Tarsus, 4.20. This species ranges throughout most of North America, breeding in thefar North. It is common in winter on the Atlantic coast about the Carolinas Text Appearing After Image: KEY TO THE WATER BIRDS OF FLORIDA. 241 and Virginia, and occasionally wanders as far south as Florida. I know ofone or two instances where it has been seen, and a specimen was killed andbrought into Jacksonville in the winter of 1894-5. ORDER ODONTOGLOSS/E. LaMELLIROSTRAL GRALt.ATORES. Family PHCENICOPTERID^. Flamingoes.Genus PHCENICOPTERUS Linn. PHffiNICOPTEftUS RUBER Linn.American Flamingo. Adult male: Entire plumage scarlet; most of theprimaries black; legs lake red; terminal half of thebill black; basal half of lower mandible orange. Thefemale and immature males are lighter colored andpaler. Length, 52; Wing, 17; Tail, 6.50; Tarsus, 12.50; Bill,S-2S- This species occurs on the coast of trop-ical and sub-tropical America. It is a resi-dent in Florida, although seldom seenthere. At one time it was abundant but isnow only to be found in one or two local-ities. East of Cape Sable there was quitea colony of them, but the place is very diffi-cult of access and they are very shy. Thisspe Note About Images Please note that these images are extracted from scanned page images that may have been digitally enhanced for readability - coloration and appearance of these illustrations may not perfectly resemble the original work.