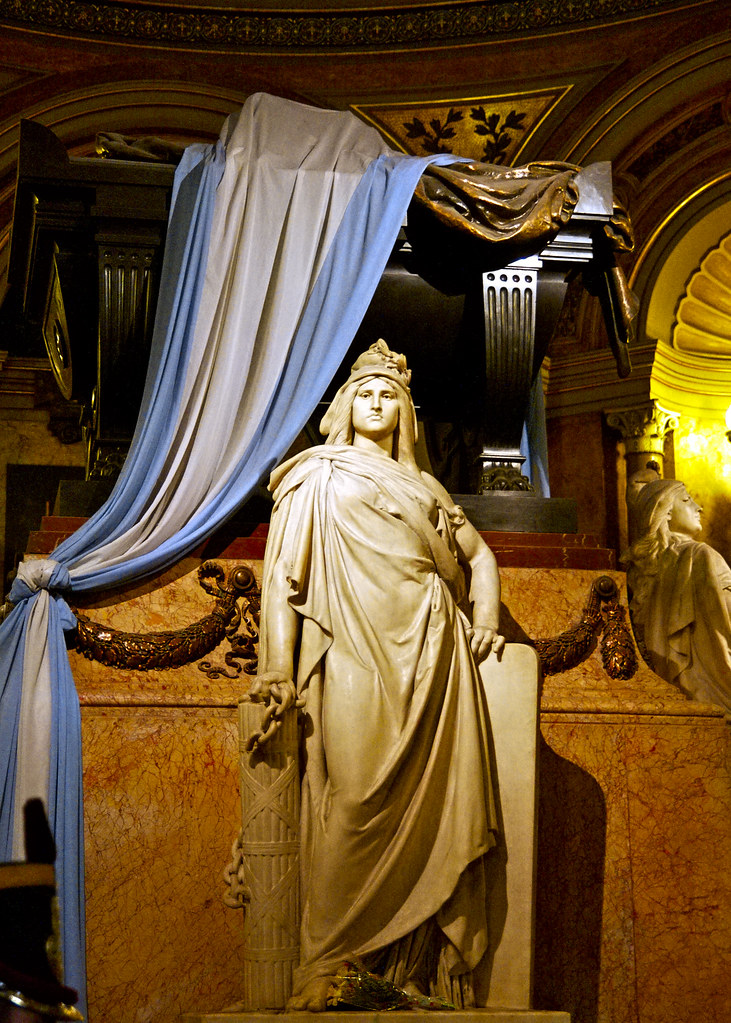 License: Creative Commons - Attribution
Author: David
Description:
The Father of Argentina. The Libertador. His tomb is in the Buenos Aires Cathedral right off of the Plaza de Mayo. It is guarded by two soldiers on par with the Buckingham Palace guards. According to the Wikipedia: José Francisco de San Martín Matorras, also known as José de San Martín (25 February 1778 – 17 August 1850), was an Argentine general and the prime leader of the southern part of South America's successful struggle for independence from Spain. Born on February 25, 1778 in Yapeyú, he left his mother country at an early age and studied in Madrid, Spain where he met and befriended Chilean Bernardo O'Higgins. In 1789, after joining the Spanish forces to fight against the French, and participating in several battles such as the Battle of Bailén and Battle of Albuera, San Martín started making contact with South American supporters of independence. In 1812, he set sail for Buenos Aires from England, and offered his services to the United Provinces of the South (roughly present Argentina). After the Battle of San Lorenzo in 1813, and some time in command of the Army of the North during 1814, he started his plan to attack Lima. This involved first creating an army in Cuyo, liberating Chile, and then attacking Lima by sea. In 1817, he crossed the Andes from Mendoza to Chile, and prevailed over the Spanish forces after the Battle of Chacabuco and Battle of Maipú (1818), liberating Chile together with Chilean Bernardo O'Higgins. San Martín seized partial control of the viceroyalty's capital (Lima) on July 12, 1821 and appointed Protector of Perú. After a closed-door meeting with fellow libertador Simón Bolívar at Guayaquil, Ecuador on 22 July 1822, Bolívar took over the task of fully liberating Peru and declared its independence. San Martín unexpectedly left Perú and resigned the command of his army, excluding himself from politics and the military, and moving to France in 1824. The details of the 22 July meeting would be a subject of debate by later historians. Together with Simón Bolívar in the north, San Martín is regarded as one of the Liberators of Spanish South America. He is the national hero of Argentina. The Order of the Liberator General San Martin (Spanish: Orden del Libertador General San Martín) in his honour is the highest decoration in Argentina.