Effortlessly floating on the Dead Sea 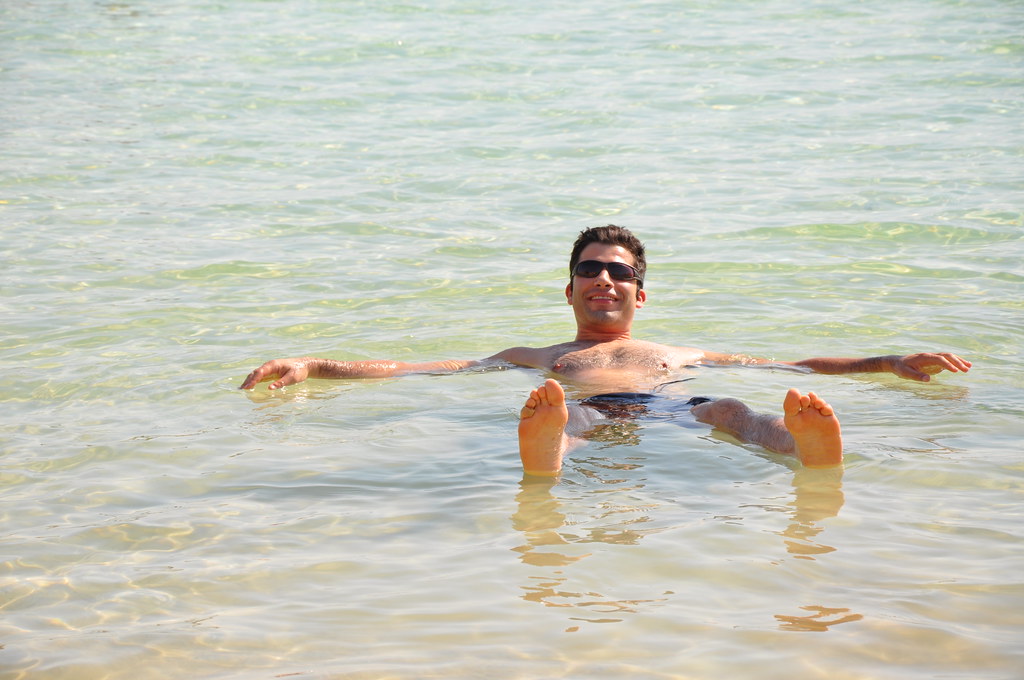 License: Creative Commons - Attribution
Author: Jorge Láscar
Description:
The Dead Sea, also called the Salt Sea, is a salt lake bordering Jordan to the east, and Israel and Palestine to the west. Its surface and shores are 427 metres (1,401 ft) below sea level, Earth's lowest elevation on land. The Dead Sea is 306 m (1,004 ft) deep, the deepest hypersaline lake in the world. With 34.2% salinity (in 2011), it is also one of the world's saltiest bodies of water, though Lake Vanda Antarctica (35%), Lake Assal (Djibouti) (34.8%), Lagoon Garabogazköl in the Caspian Sea (up to 35%) and some hypersaline ponds and lakes of the McMurdo Dry Valleys in Antarctica (such as Don Juan Pond (44%)) have reported higher salinities. It is 9.6 times as salty as the ocean. This salinity makes for a harsh environment in which animals cannot flourish, hence its name. The Dead Sea is 50 kilometres (31 mi) long and 15 kilometres (9 mi) wide at its widest point. It lies in the Jordan Rift Valley, and its main tributary is the Jordan River. The Dead Sea has attracted visitors from around the Mediterranean basin for thousands of years. Biblically, it was a place of refuge for King David. It was one of the world's first health resorts (for Herod the Great), and it has been the supplier of a wide variety of products, from balms for Egyptian mummification to potash for fertilizers. People also use the salt and the minerals from the Dead Sea to create cosmetics and herbal sachets. The Dead Sea seawater has a density of 1.240 kg/L, which makes swimming similar to floating [Wikipedia.org]